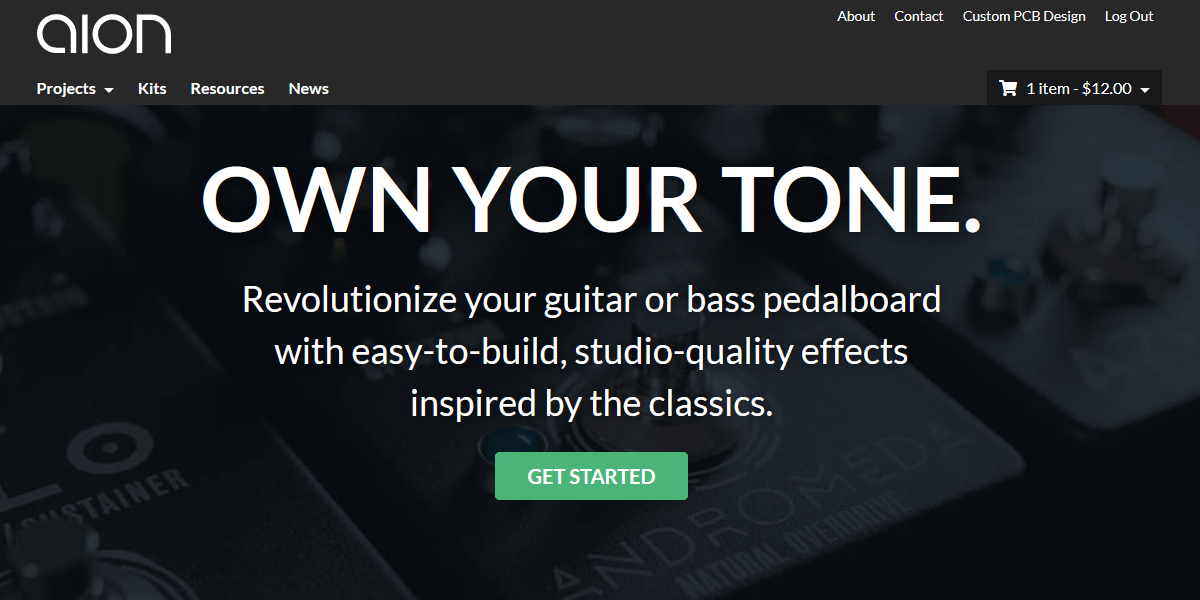 Just over a year ago, I was able to quit my day job to do Aion FX full time. This followed a career as a web developer, something I’d been doing my whole professional life. (Or longer, really—I started building websites when I was 12 and had my first paid project at 15.)

But you may have heard the saying: “the cobbler’s children have no shoes”. I was building awesome websites all day long, but always felt like my own web presence was lacking. Since Aion was just a spare-time project for the first several years, I wasn’t ever able to take the time I needed to make it what I wanted it to be.

The old website was something I threw together in a weekend, a few months after our first kid was born, when PCBs started to become the focal point.

He just had his sixth birthday, so… the site was starting to show its age a bit. Not to mention that when I originally designed it, I only expected I’d ever have 20 or 30 PCBs total, and now I’ve got well over 100. And I never dreamed I’d be doing kits.

So when I started full-time last fall, I made it a goal to have the new site done within the first year. I needed something that represented Aion FX as it is today, not what it was in 2014, and it had to be able to accommodate where I want it to go in the future.

(I did miss that goal by about a month, but hey, with COVID in the mix… I don’t think 2020 has been a year of hitting deadlines, broadly speaking.)

So here are a few of the major things I want to highlight about the new site. 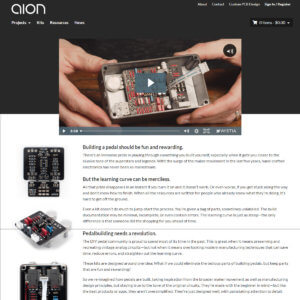 The kits page is more of an introduction for people who want to get into pedalbuilding, but you’ll probably be interested to see the video. (Side note: we shot it about a week before the pandemic hit… which was great, because I’ve most certainly aged several years in the past eight months.) 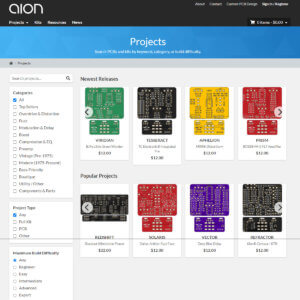 The projects listing was the page that most drove me crazy on the old site. As I mentioned, I had initially intended the page for about 20-30 different projects total, so it became more and more unruly with each new release. 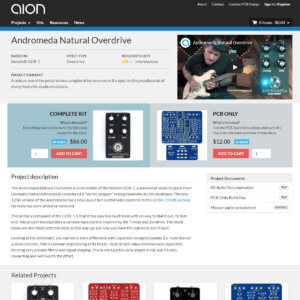 This was a tricky one. My line of work is so niche that there’s no existing e-commerce theme or plugin that fits it. Here’s what I needed the project page to do:

There’s just not anything pre-built that does all of those things. So while I was able to use an existing store platform, I had to write the front-end templates from scratch to get what I want.

I’m thrilled with how it turned out, and it does everything I need it to… but wow, I definitely envy people who can just click a few buttons and install a theme!

In 2018 I switched over to doing all new projects in the 125B enclosure format. To date I’ve done 70 projects in this format and it’s safe to say I’ll be sticking with this for the foreseeable future. The kits are designed around this new platform, and there’s a natural “life cycle” where I first release standalone PCBs, then I make the most popular ones into kits.

So as a result, with the launch of the new site, all of the pre-2018 PCBs in the 1590B format are now considered “legacy” projects. This is a software term meaning something that is outdated even though it’s still used by some people. A lot of people still prefer this format, so I just want to make sure to say it loud and clear: the 1590B projects aren’t going anywhere! There won’t be any new designs for the 1590B, but I’ll keep the existing ones alive for as long as people want them.

There are still about 15 of the legacy projects that don’t have 125B counterparts, but I’m planning to make one last push to finish the remaining ones in the next few months so that they’re all updated by January or February of next year.

One last little thing you may have noticed: I’ve been using Aion FX and Aion Electronics interchangeably during the past few years, but with the new site and the domain change, it’s now officially Aion FX.

I was on a bit of a deadline to get this site live before a certain podcast episode dropped, so a few things got cut from phase 1, most notably the build reports. You’ve submitted over 400 of these over the last few years! I have them all ported over to the new site, I just haven’t had a chance to finish the actual front-end pages yet. I had to disable them for the initial launch, but they’ll be back very soon.

I also plan to build out the Resources section a lot more. There are only four articles there now, ported over from the previous site, but I have 12+ more articles partially written that I’m eager to finish up and publish. That’ll be something for December or January when things are a bit slower.

But man – I am very excited to finally have this out there. It was about three solid months of hard work, and I had to push back a lot of other exciting projects to make room for it, but it’s been worth every bit of effort.

Now… back to pedals!