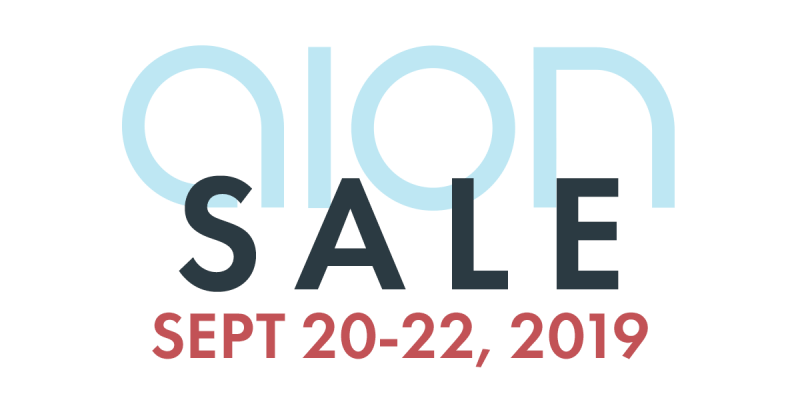 Huge announcement, plus 20% off all PCBs + 10% off kits through Sunday

TL;DR I quit my job and am now doing Aion full-time. Sale on all PCBs & kits through Sunday.

It feels strange to say it, but after 13 years working for web agencies and software companies as a developer, I’m cutting the cord and switching careers. Starting now, Aion FX is my full-time gig.

It’s been in progress for awhile. I dropped to half-time at my day job almost exactly two years ago, and have had one foot in each world since then.

But, the drop from 50% to zero is a much bigger deal than the drop from full-time to half-time! The safety net of a regular paycheck is gone. And it brings with it a very real trepidation about the economy and the state of the world, because now my job is propped up by a hobby that is very much a non-essential part of people’s lives. (well, to most of us, anyway)

We’ve planned it out extensively though and decided that I can at least commit to a full year of this. After that, we’ll re-evaluate where things stand and whether it makes sense for me to keep at it.

I don’t do too many sales in a year, but this occasion definitely calls for one. From now through Sunday at midnight, all PCBs are 20% off, and all kits are 10% off. No new releases today, but I hear the Convex is pretty cool, so check that one out if you haven’t yet.

I’ve been building websites for most of my life, but you may have heard the proverb about the shoemaker’s children going without shoes, and it definitely applies here. This website needs an update. I built this version right after our first kid was born… he’s now five years old and has two younger siblings.

So the first order of business is to finally launch an overhauled version next month that better fits where I’m at right now and where I want to go in the next few years.

I’ve released a respectable number of new projects this past summer, but it’s only the tip of the iceberg. Here’s the breakdown of my project planning list:

Of the first two categories, most of them (12-15) are brand-new traces of pedals that haven’t been dissected before. Some are vintage, some are newer, all are very cool, and I am excited to share them. I’ve been very busy tracing, now I just need to get them finished! You can expect a minimum of 20 new projects between now and the end of the year, but I’m hoping for even more than that.

All this year, I’ve gradually been developing a clarity in my vision about what Aion is, and where it fits in the DIY community.

This whole adventure started out on August 19, 2013 when I sold a RAT PCB to someone on one of the DIY forums. Back then, it was just an outlet for my own experimentation and curiosity. If there was a pedal I’d never played before and wanted to try out, I’d design a board for myself, and then release it to others as sort of an afterthought.

But the direction Aion FX has been headed is bigger than offloading byproducts of a hobby. I see it becoming an archive of analog guitar effects, not just documenting marketing and production history, but also technical data. And then, of course, DIY projects & kits to help you build your own and bring them back to life.

I love doing research, both historical and technical. Guitar effects have a very rich history going back nearly sixty years since the Maestro FZ-1A hit stores (and speakers) in 1962. They’re woven into the fabric of the history of music itself. The stories are interesting and the designs are fascinating.

But sometimes information is lacking. There have been a few occasions when I based a project on a verified schematic from someone else, only to find out that there was an error in the source schematic. And it may be that every DIY clone of that pedal uses that same schematic, so we’ve all been building it wrong.

As a stickler for accuracy, this gets under my skin. So this past year, I’ve started trying to borrow or buy original effects whenever possible so I can have them as a point of reference as part of the research & development process. In some cases, this practice has uncovered inaccuracies in other people’s traces, and in other cases I’ve found what appear to be previously-unknown variations in the manufacturing process throughout the production run.

Sometimes it’s useful just to be able to measure the specs of the transistors or JFETs, or to take voltage readings from the active components. For old circuits, especially pre-1975, before engineers learned how to nullify the effects of variations in components, something like the hFE value of a transistor really does make a significant difference in the tone.

And even if we find that a known schematic is in fact 100% accurate, it’s still good to have it confirmed. One way or another, we’re getting closer to the truth when we have access to an original unit. It’s brought great things so far and so I’m going to keep at it.

There are some other PCB suppliers who have very different niches than I do, such as designing original circuits or making clones of big-name boutique effects. For me, though, it’s all about vintage circuits. I’ll have a few original designs here and there, and I’ll put out the occasional clone of a popular boutique effect, but it’s not really my main focus for where I’m heading.

Over the past year, I’ve developed a drive to keep vintage analog circuits alive. I want to help people understand them and appreciate them. I want to modernize them, making them more straightforward to build with as few arcane components as possible, perhaps adding new features where there’s a place for them. But above all, I want the original tone to be preserved, and I want to make it as easy as possible for you to get there.

I also want to bring new (old) circuits to the DIY community. We’ve got a canon of 50 to 100 popular effects that most people build or use as a starting point. But there are a ton of old phasers, fuzz pedals, rack units, preamps, and so much more more from the 1960s through the 1990s that were incredible feats of engineering, yet remain mostly unknown among DIYers, partly for lack of awareness and partly because many of them are big and intimidating.

But I’m not scared off by complexity! The L5 Preamp and Blueshift (Dimension C) are two of the most complex (yet rewarding) builds in the DIY pedal scene, and now that I have more time to focus, I’ll be doing even more like that.

So buckle up! I’ve got a year to bring my vision to life by cranking out as much as I can, and you all get to be the beneficiaries of that. The success during this year will decide whether I’m able to do it for another year, and another after that.

Thanks so much for the wild ride that Aion has been for the past six years. I very literally could not do it without you, and I really appreciate the support that has gotten me to this milestone moment.

Now… time to get to work!