Based On
Ibanez® Mostortion
Effect Type
Overdrive / Distortion
Build Difficulty
Easy
Project Summary
A reproduction of a rare and very expensive low-to-mid-gain overdrive with 3-band EQ that is popular in the Nashville scene. 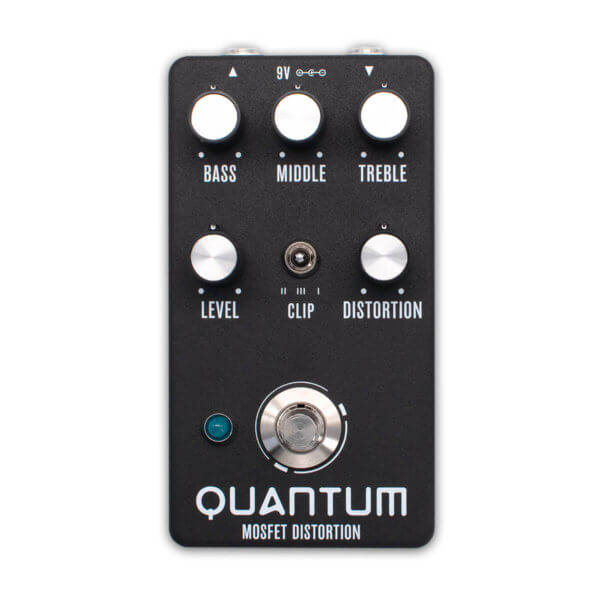 The Quantum MOSFET Distortion project is a clone of the Ibanez MT-10 Mostortion MOS-FET Distortion, a fairly obscure pedal in the Ibanez “10 series” released in 1990 and discontinued in 1993.

It’s unique in that it’s the only Ibanez pedal with a 3-band tonestack, which was uncommon up until the 2010’s when you started to see amp-like pedals from companies like Wampler. Before then, the Marshall Shredmaster and Guv’nor (Drivemaster) were two well-known examples, but there aren’t many others.

Along with the Guv’nor and Shredmaster, this is one of the first pedals to use a full 3-band tonestack, and the only one in Ibanez’s history.

The MT-10 Mostortion was designed as part of Ibanez’s 10-series line of effects, first released in 1990 and discontinued in 1993.[1] It flew under the radar for the most part: it got good reviews, and remains well-regarded today among those who know about it, but was released during a low point in analog guitar effect history when everyone was going crazy over the newer digital technology and good analog designs were overlooked.

It’s never been reissued or adapted, so it remains one of Ibanez’s obscure gems. Lee Roy Parnell and Guthrie Trapp both swear by them.

The input buffer stage has the standard 510k base resistor going to an asymmetric voltage divider that’s different from the circuit’s Vref—in other words, it creates a second reference voltage, but one that’s not exactly half the supply voltage. Most of the rest of the 10 Series shares this same tweak, so perhaps it was intended to make the buffered bypass mode better insulated from the effect.

The clipping stage has a couple of interesting things about it. First, the low-end corner frequency is 267 Hz rather than the nearly-ubiquitous 723 Hz seen in the Tube Screamer and others. This increases the bass content by a lot, and results in more bass getting clipped by the diodes which could give a fuzzier or “squishier” sound. It would be too much bass if not for the passive bass control later on that allows you to dial it out; however, it still retains some of the characteristics since it’s already clipped the bass-heavy waveform. You might drop the 220n cap to 100n if the bass doesn’t feel as tight as you’d like.

Also in the clipping stage is the diode arrangement: it uses two MA165’s (1N914 workalikes) in series, doubling the clipping threshold of most other feedback-clipping circuits like the Tube Screamer. The effect of this is less compression and more dynamics, which works together with the CA3260 op amp to give the MT-10 its character.

The 3-band passive tonestack is similar to Marshall and Fender tonestacks, and nearly identical to Peavey solid state guitar amp tonestacks. It’s a passive tonestack, contrasted with the typical Tube Screamer tone control which is driven by an op amp. In the process of shaping the tone, the overall signal level is cut, so it needs to be followed by a gain recovery stage in order to get back up to a reasonable volume level. The second half of the CA3260 op amp provides a gain of 15 dB, with the R-C filter having a corner frequency of 15 Hz—in other words, a full range boost.

From there, the volume control and output buffer are pretty standard. You could probably use an audio taper instead of linear taper for the 100k volume control for better adjustment. The 10uF output capacitor is also overkill for what it does—you could replace it with anything down to 1uF without any audible change.

Instead of the relatively rare CA3260, you can use any other dual op amp—it’s the standard pinout. It won’t have quite the same characteristics (there are no direct substitutes for the CA3260) but you should be able to get really good sounds even out of the typical JRC4558. One potentially suitable MOSFET-based substitute is the TLC2262, which is a rail-to-rail op amp.

The stock configuration of the clipping diodes is pretty good already and is usually what you’d modify other pedals to do—more dynamics and less compression than a standard Tube Screamer. However, the updated version of the Quantum does include two alternate clipping modes: a single diode in each direction (Tube Screamer clipping) for a more compressed clipping, or LEDs for more transparent & crunchy tones.

As mentioned earlier, the corner frequency in the clipping stage is really low and might impart some unwanted clipping characteristics, sometimes described as flabby or mushy. This can be adjusted by dropping C5 (the 220n capacitor) to 150n, 100n or even lower. (Use 82n to get the stock Tube Screamer corner frequency of 723 Hz. Just bear in mind that the bass control is passive—it can only subtract—so it will be less useful if the signal doesn’t have much bass in it.)