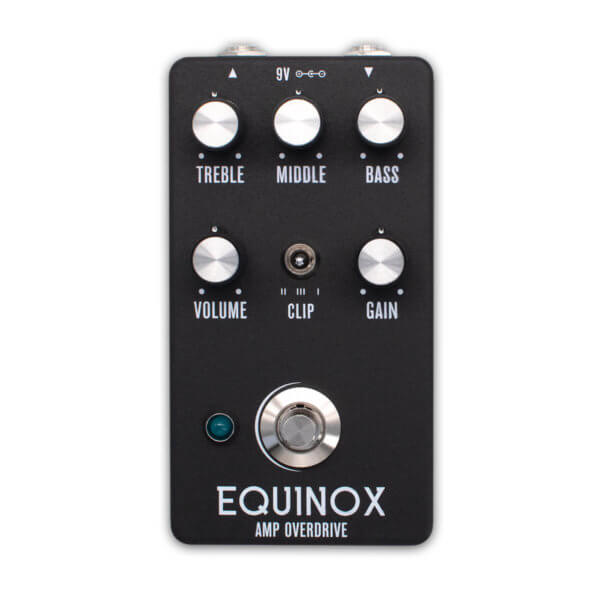 The Equinox Amp Overdrive project is a clone of the Marshall Guv’nor and Drivemaster. (The two pedals have different names, but they are identical circuits in every way except that the Guv’nor has an effects loop which has been excluded from this project).

First released in 1988, the Guv’nor was replaced in 1991 by the Drivemaster, the same time the Shredmaster and Bluesbreaker pedals were released. It was a very popular pedal at the time and remains well-regarded.

The Guv’nor was among the first overdrive pedals to use a 3-band tone control, allowing for more amp-like toneshaping via bass, midrange and treble knobs. Interestingly, while it looks like an amp tonestack on the surface, it’s actually a little closer to a Big Muff tone control in its technology. All three controls are much more interactive than you’d usually see on an amp.

The Guv’nor was first released in 1988, Marshall’s first effect pedal since the Supa-Fuzz and Supa-Wah in the late 1960’s. The name was suggested by Jim Marshall after one guitarist tried a prototype and remarked that “that pedal’s just the guv’nor, innit” (which is British slang for “the best” or “the ultimate”).[1] It was specifically designed to be an amp-like pedal, allowing you to get a Marshall-like sound at low volumes or with different amplifiers.

The original Guv’nor had a post-drive effects loop that was engaged along with the pedal, allowing you to treat it like you would a second amplifier channel—for instance, putting EQ, delay or modulation in the loop so that your entire lead tone could be switched with one effect.

In 1991, the Guv’nor was renamed the Drivemaster, and the Shredmaster and Bluesbreaker pedals were released along with it. The only change was that the effects loop was removed; the schematic is otherwise identical. It was a very popular pedal at the time and remains well-regarded.[2]

These pedals were discontinued a few years later, and in 1998 they were replaced by a new line of compact pedals, including the Guv’nor Plus, Bluesbreaker II, and the Jackhammer, which is a renamed Shredmaster. Generally these new versions added features—for instance, the Guv’nor Plus has an additional “Deep” knob—and other schematic changes were made as well. These rereleases are generally viewed as vastly inferior to the originals, which now fetch pretty high prices on the secondhand market.

The first circuit block of the Guv’nor is comprised of two op-amp stages: an adjustable op-amp boost & filter, set up as a non-inverting stage which has a bass roll-off corner frequency of 723 Hz (same as the Tube Screamer), followed by an inverting stage with a treble roll-off corner frequency of around 1060 Hz. So there’s a bit of a mid hump, but not quite as sharp as a Tube Screamer where the bass and treble cutoff frequencies are both 723 Hz.

The Gain control is interesting—it’s the same variety as found on the Bluesbreaker and Shredmaster pedals, but I’ve not seen it elsewhere. Let’s break it apart.

In this circuit, the Gain pot is actually set up as a voltage divider rather than a variable resistor. When resistance is added to the feedback loop of the non-inverting op-amp, it’s also subtracted from the input of the inverting op-amp—which in both stages increases the gain.[3]

Even though the pot is linear taper, in this setup it behaves somewhat logarithmically, so it’s very usable across the range.

The Guv’nor uses a hard-clipping configuration, but it has a very high threshold since it uses LEDs as clipping diodes. It’s not going to sound as compressed and gainy as a Distortion+ or OD-855. (On this project, there is a diode selection switch if you want to try out something besides LEDs, but read the “Volume control & circuit output” section below for more information on how the clipping works.)

This is a strange one. The topography looks pretty similar to the 3-band tonestack used on Marshall amps, which was adapted from Fender. Actually, though, it’s a bit closer to a Big Muff tone control. The Big Muff control pans between one side that cuts bass and emphasizes treble, and one side that cuts treble and emphasizes bass. The Guv’nor tonestack expands on this so that the treble side has an additional control for Mids (which is a pretty common mod for the Big Muff—see the legacy version of the Halo), and the bass side has an additional control that essentially blends another capacitor into the circuit, which adjusts the bass frequency response.

The end result is that the controls are all highly interactive: as you turn the Treble control all the way up, you also gradually reduce the bass control’s effect on the circuit. The Mids control is connected across both sides, so it has an effect at both extremes of the Treble range, though it’s slightly different on each side.

Pretty standard from here on out, but I actually want to talk about what’s not there. Passive tonestacks are lossy, meaning the overall level of the signal is cut during the process of shaping the tone. If you look at the Shredmaster, Big Muff or MT-10 Mostortion, you’ll notice a gain recovery section immediately following the tone stack.

Why not here? Well, in this case it’s because of the choice of clipping diodes. In a hard-clipping formation, the signal is clipped above the diodes’ forward voltage, which means the signal’s amplitude is hard-limited as well. But since LEDs have a very high forward voltage (around 1.8V, compared to 0.6V for a standard 1N914), in the Guv’nor the amplitude of the signal is high enough to still have good volume without a gain recovery stage after the tonestack.

Lowering the clipping threshold will have a direct effect on the available volume, so when using either the switch positions other than the center (stock) setting, the maximum volume will be reduced.

The other strange thing about the output section is the 470pF capacitor to ground, which cuts the treble by a fair amount. A common modification is to omit this altogether—after all, you’ve already got a very usable treble control, so just turn it down a bit if it’s too bright. You could also drop this to 220pF or 100pF if you don’t want to remove it altogether. 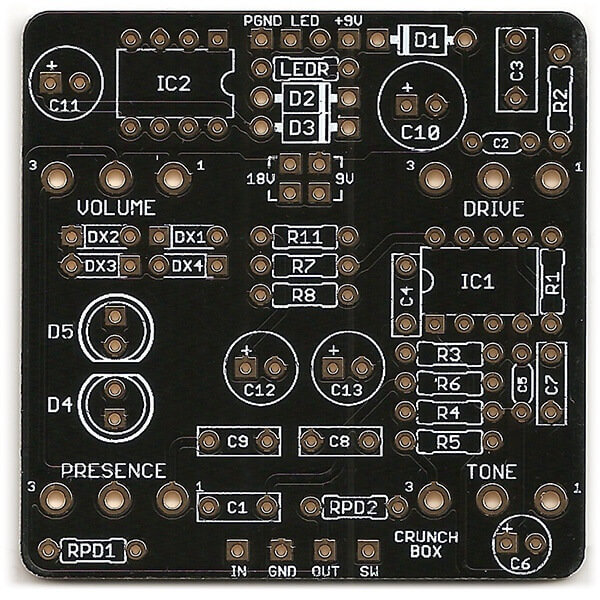