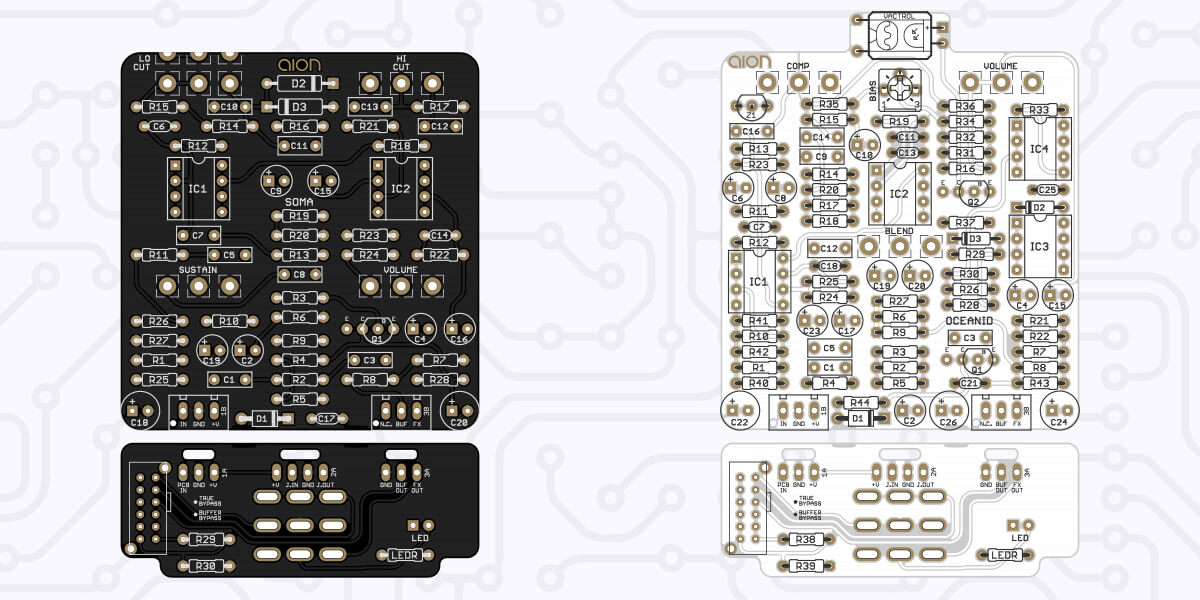 Over the summer, I teased a Cornish trace that I was working on, which understandably attracted a lot of curiosity (not least because of the X-ray). Pete Cornish is a legend, but most of his pedals have never been traced, partially due to the incredibly expensive sticker price.

I decided I’d wait to surprise everyone with the news: I actually traced two different Cornish pedals this summer, and today you get to see both of them.

First up is the Cornish OC-1 Optical Compressor, originally released in 2014. Pete claims this is an all-original design, although no one’s ever cracked one open to confirm. Well, I did, and I can confirm that it is in fact original, without a whole lot in common with anything else I’ve seen.

The tracing journal is now posted for you to check out. The Oceanid Optical Compressor is also available today, based on the OC-1 but with a switchable true-bypass mode in addition to the buffered bypass in the original.

Second is the Cornish SS-3 Soft Sustain, an update to the earlier SS-2 with an added low cut control—very useful since Cornish pedals tend to be somewhat bass-heavy, and the SS-2 was no exception.

An unofficial and unverified SS-2 schematic has existed for awhile. It was not based on a direct Cornish trace, but rather a trace of a pedal called the Skrydstrup ODR-2 which itself was rumored to be based on the SS-2. So there’s a bit of a telephone game here where there could be errors at each stage of the process. The only way to clear it up was to trace an original, either the SS-2 or the newer SS-3, which claims to be identical to the original but for the low-cut control.

Whatever the case, the tracing journal for the SS-3 is available for you to check out, and the Soma Vintage Overdrive is releasing today if you’d like to build your own version of the SS-3. Again, as with the Oceanid, it’s a faithful adaptation of the SS-3 but with a switchable true-bypass mode.