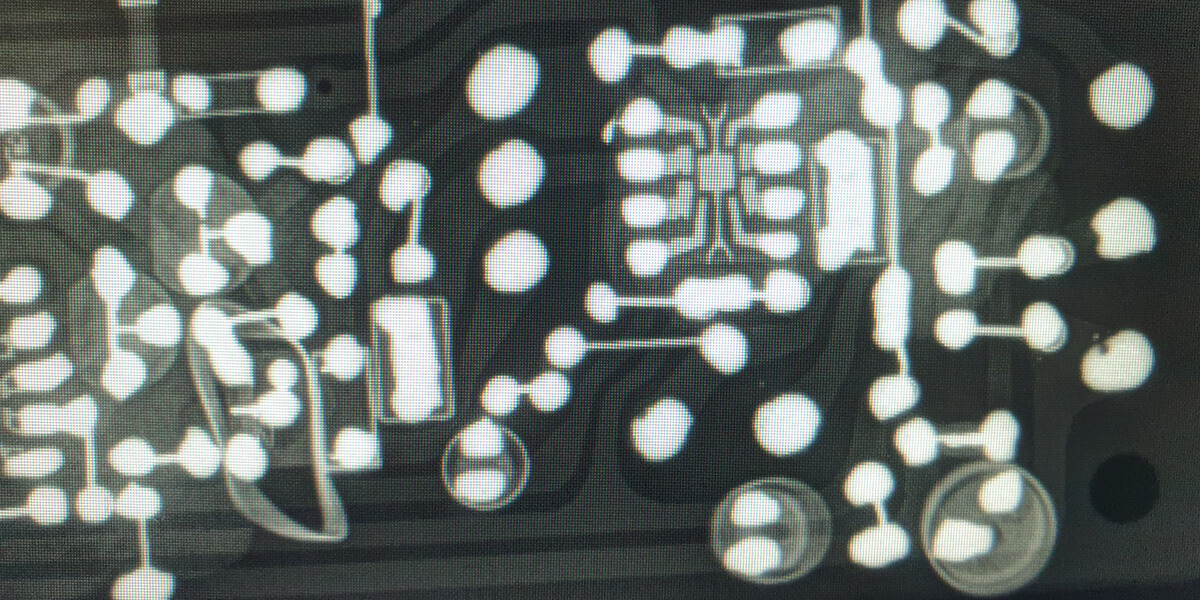 The OC-1 Optical Compressor is the the first of two new Cornish pedals I traced that are releasing today, alongside the SS-3 Soft Sustain.

I originally teased it on Facebook over the summer, and it attracted some attention not just because it was a Cornish that hadn’t been dissected before, but also because of the X-ray photo I included along with it: 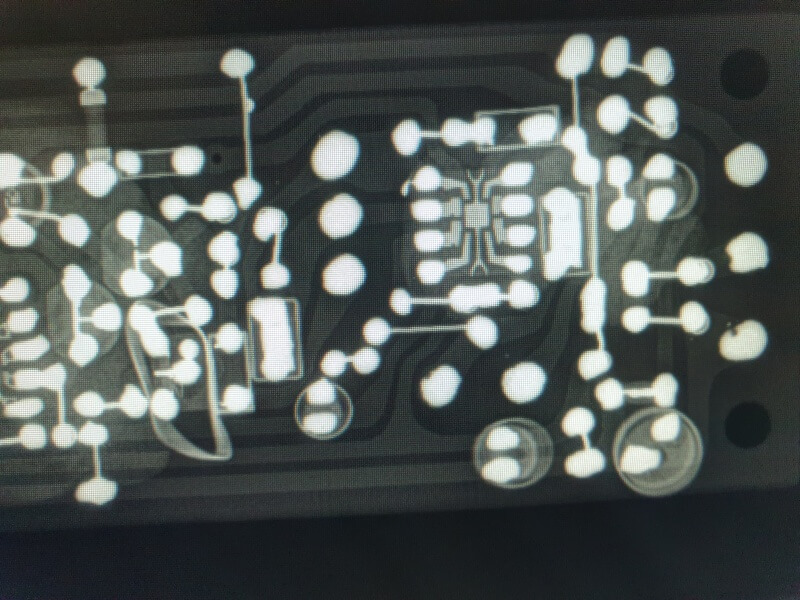 Why the X-ray, since there’s no way a complete circuit could be traced from it?

Well, the main reason was just because I had the opportunity! A friend suggested it, and said he knew a guy who could do it. I’d never seen an X-ray of a pedal before so I figured it’d be interesting.

The second reason was that we could get a really good idea of the overall topology without having to de-goop anything. We were trusting the marketing copy from Cornish that it was an original circuit, but when people cover things with goop, sometimes it’s just to hide the fact that it’s not actually as original as they want people to think. So we didn’t want to risk ruining a $500+ pedal just to find out that it was a variation of the Flatline or something similar. If I could tell that it was going to be boring, I’d have sold the pedal untouched and tried something else.

The good news is, the X-rays were enough to tell us that the OC-1 was in fact an original design, not quite like anything else we’d seen before. So we went ahead with it.

Here are a few highlights. There are 50+ photos in total that you can check out in an Imgur gallery if you’d like to see more detailed pictures. 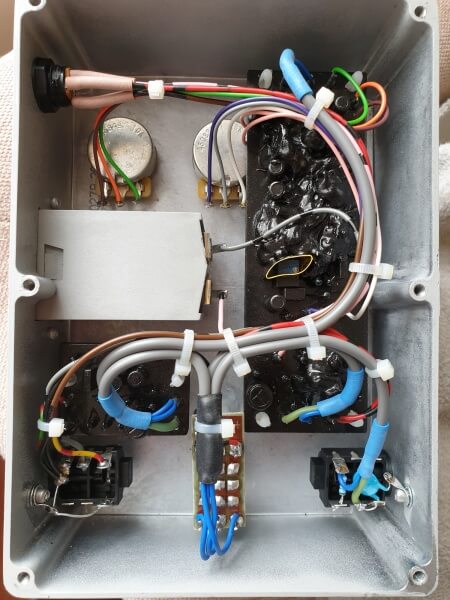 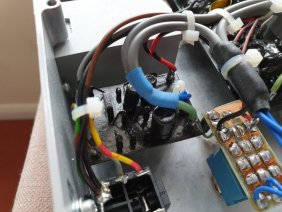 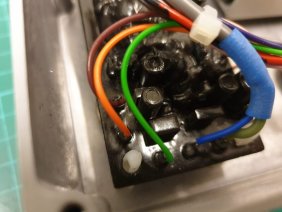 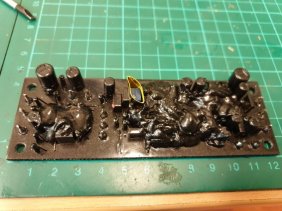 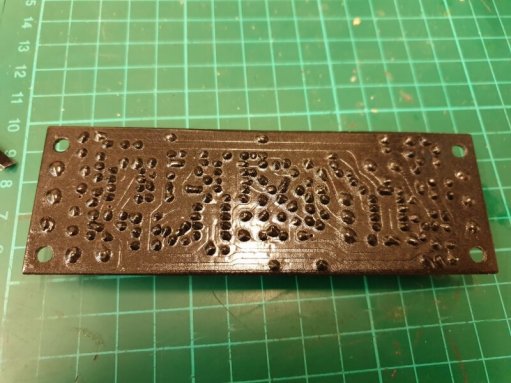 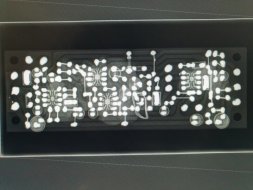 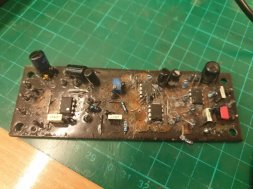 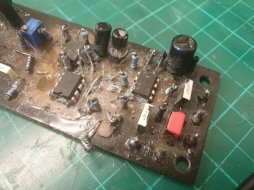 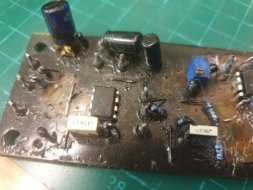 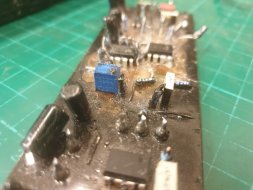 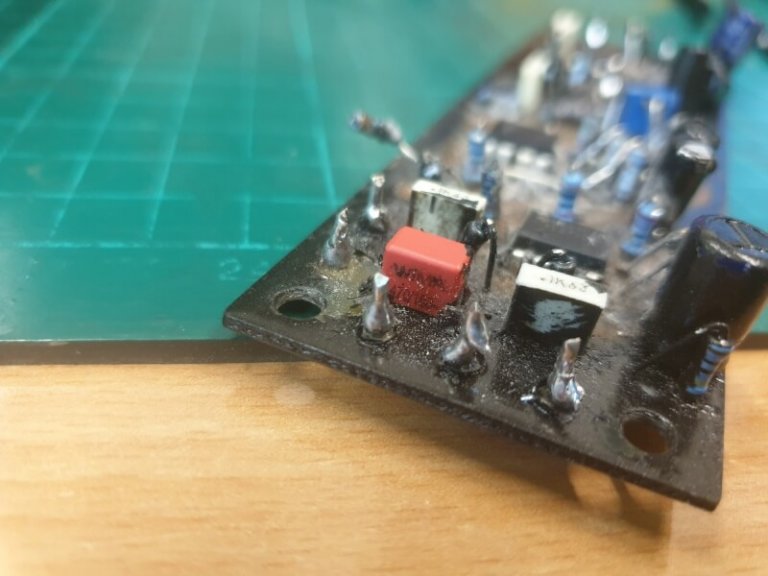 The degooping process was pretty time-intensive. Many Cornish circuits (including the SS-3, as you can see in the other tracing journal) only have a thin layer of conformal coating that is easily scratched off, but others like this one have really thick epoxy that is hard as a rock. It came off with some coaxing, but as you can see, it wasn’t pretty afterward.

From there, we took off every single resistor and capacitor and measured the values rather than relying on partially obscured color codes. We went slowly and took our time. After the initial trace was complete, three different people checked the tracing work for errors. So I can say with a high degree of certainty that this circuit is cracked.

Since people may be wondering: I’m not going to reassemble this unit and try to sell it as though it was untouched. I may keep it for reference, or I may sell or trade it privately with full disclosure that it was degooped for a reverse engineering project. But either way, it’s not going to end up on the used market. 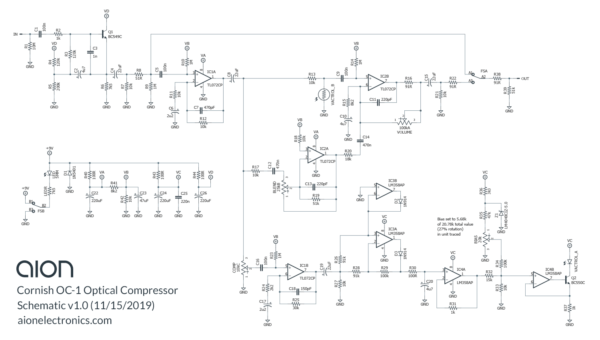 As mentioned, it doesn’t bear much resemblance to anything else out there. The audio path is pretty straightforward, with the classic Cornish buffer, and then a 3-way split into the compressed path, clean path for blending, and sidechain (peak detector).

The compression itself happens by means of a simple voltage-dividing attenuator, essentially a dynamically-operated volume knob, formed by R13 and the LDR portion of the vactrol. This method of volume reduction is the same type used all the way back in the first optical compressors from the 1950s such as the LA2A.

The sidechain is designed to turn the audio signal into a control current to illuminate the LED in the vactrol. I’ve never seen this topology before, but if someone recognizes it from an application note or textbook someplace, please let me know so I can add the reference and better explain what is going on.

The clean blend path gradually combines the clean signal with the compressed signal as you turn it up. It is not a balance control like some other blend circuits where one end of the knob is full clean and the other end is full effect.

The volume control is also set up so that the minimum position is unity, as opposed to zero volume. It’s an op-amp gain stage rather than a traditional volume knob at the end of the circuit. The volume control and blend control are somewhat interactive with each other and the volume may need to be backed off when the blended signal is added in to maintain a constant signal level.

The Oceanid Optical Compressor is a new Aion project releasing today based on the OC-1. It’s a direct adaptation of the original OC-1 except that the buffered bypass is switchable to true-bypass mode.

Disclaimer: Aion FX is in no way affiliated with Pete Cornish. Any trademarks are property of their owners and are used for comparative purposes only.