Based On
Brown Sound in a Box II
Effect Type
Amp-like overdrive
Build Difficulty
Easy
Project Summary
A classic DIY design that uses mu-amp stages to get a sound reminiscent of Van Halen’s classic “brown sound” based around his 1968 Marshall Super Lead amp. 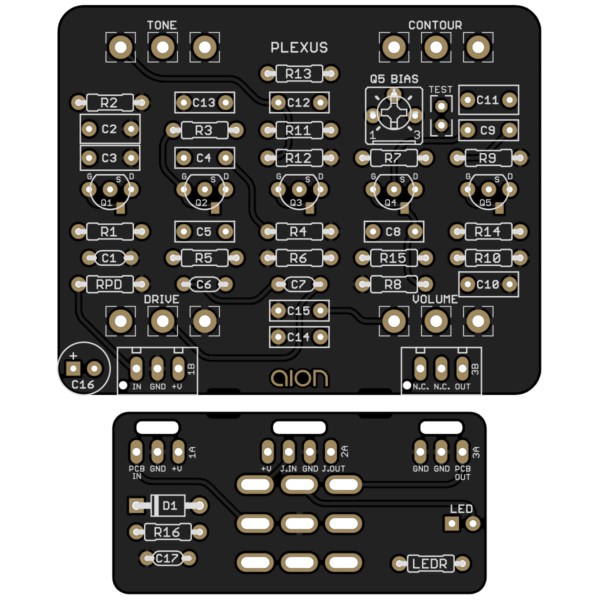 Not yet available.
Kits are developed based on interest, so if you’d like to see one for this project, let us know.
Request Kit
27 people are interested.

The Plexus Amp Overdrive is based on a classic design from the DIYStompboxes community called the “Brown Sound in a Box”—specifically the second version, which had improved tone shaping.

Designed by Ed Guidry, the first version appeared in 2001 as a modified version of Jack Orman’s Mini-Booster. Aron Nelson had added a Big Muff-style tone stack to the Mini-Booster, which was the basis for our Delta project. Ed used this topology as a starting point, adding an extra JFET stage and some strategic hi-cuts to make it sound more amp-like.

The second version followed in 2004. The JFETs were changed from J201 to 2N5457 for a less gainy and compressed drive sound, and more high-end filtering was added to better simulate the resonance of a speaker cabinet. This one caught on even more than the original and is universally considered to be the better design.

2N5457 JFETs are no longer available in through-hole format. Extra pads have been provided if you want to use surface-mount JFETs (part number MMBF5457), which perform identically to those used in Catalinbread pedals. Aion FX also offers pre-soldered MMBF5457s on adapter boards if you find surface-mount parts intimidating. See build documentation for more details.

It’s also worth mentioning that this design has a great deal of similarity to Catalinbread’s “foundation” series of amp-emulation drive pedals, which began in 2009 with the Dirty Little Secret. Catalinbread had roots in the DIY community, so this circuit was almost certainly one of their inspirations for the series.

The Plexus is a direct clone of the BSIAB2, with the addition of the popular “contour” mod from the community that allows the frequency of the tone stack to be adjusted.