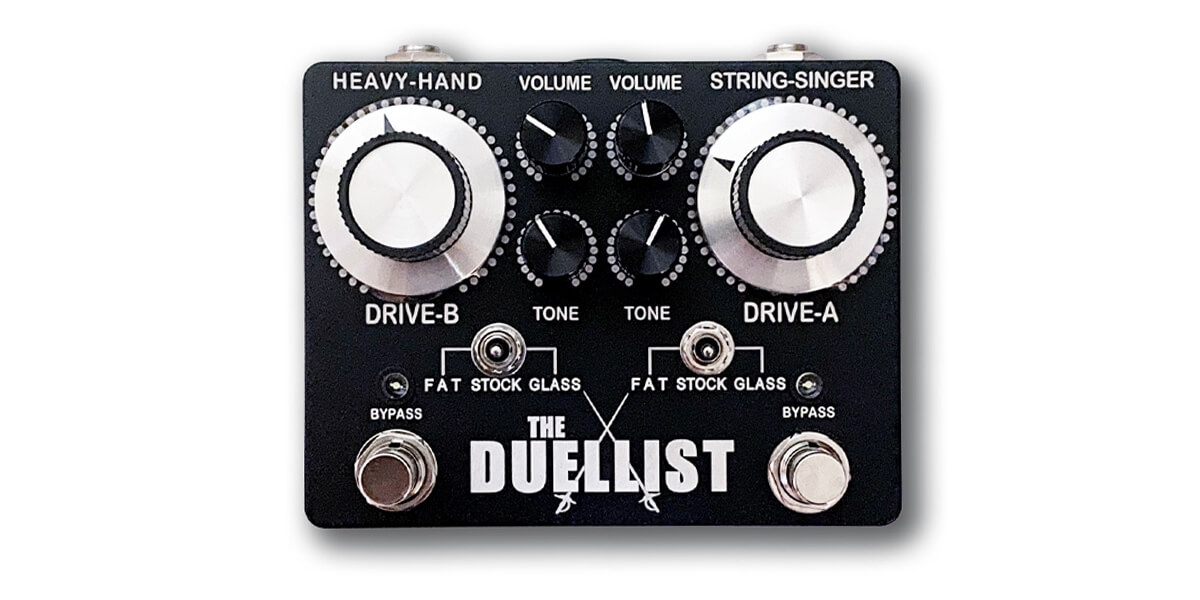 In this journal we’re covering three related pedals from King Tone: the Duellist, Soloist and Heavyhand. (We also traced the Blues Power, which is covered in a separate post.)

The Duellist is a dual pedal that consists of a modded Tube Screamer into a modded Bluesbreaker. It clearly takes some inspiration from the Analogman King of Tone (especially considering the company name!), but it’s far from a clone and covers a very different tonal space.

Here’s the official video from Jesse Davey at King Tone giving an overview of the Duellist:

The Soloist and Heavyhand are single-channel versions of the String-Singer and Heavy-Hand channels respectively. Here’s the Soloist:

The Heavyhand does not have an official demo video, so just reference the Side B portion of the Duellist demo to get the gist of it.

Whether or not you think the world needs another Tube Screamer or Bluesbreaker, they do sound pretty fantastic. We traced all three of them so you can see what’s going on inside.

The Duellist first came out in 2015. The earliest enclosures were CNC engraved, and the finish was polished aluminum with recessed black artwork. By 2017 they had added black and red powdercoats to the available finishes. In 2018 they switched to UV printing rather than engraving, from that point the standard color scheme was black powdercoat with white text. In 2021 a limited “Five Year Anniversary” version was released in the original black-on-polished-aluminum color scheme.

Internally, there were no known circuit revisions during this time. The first major redesign came in 2020 when the jacks were moved to the north side to make it more pedalboard-friendly, but this new layout seems to have been entirely cosmetic. The first actual circuit revisions came in 2022 when the DIP switches were made externally-accessible and two more were added for a total of six different positions (three per channel). The setting labels were renamed, so we don’t know whether four of the six settings still correspond to the original Duellist or if any of them have been changed. In addition, an order-switching slide switch was added, also externally-accessible.

We traced a top-jack model from 2021 (PCB version 1.2) so it did not have the extra DIP positions or the order-switching slide switch. 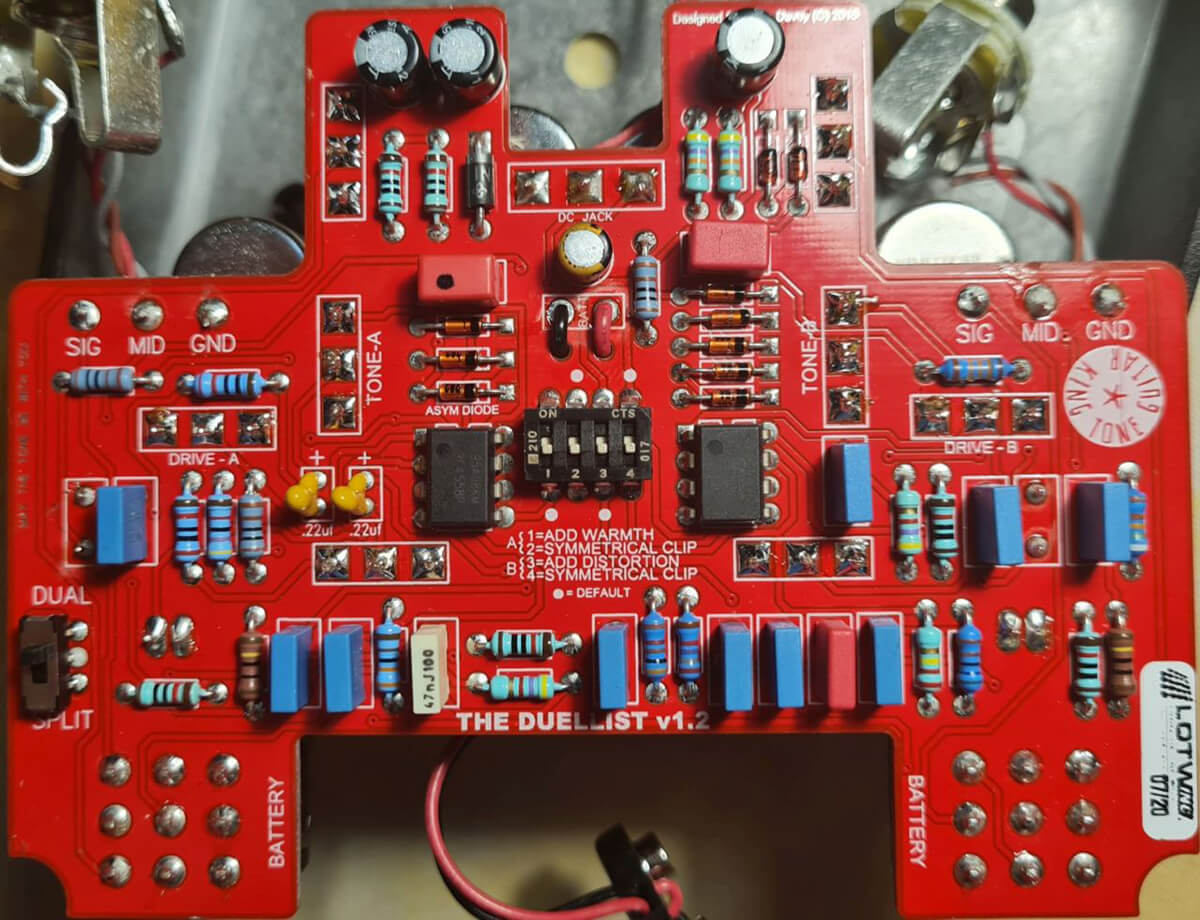 Since we did this after the Soloist and Heavyhand, it went pretty quickly with no desoldering necessary. The topology was known, so it was just a matter of filling in values and making sure there were no surprises. We didn’t end up taking many photos of it, but the above photo is the unit we traced. Note that the PCB says 2015 on it, but ours was definitely a new unit from 2021, so it’s just the date it was originally designed and not reflective of the current revision. 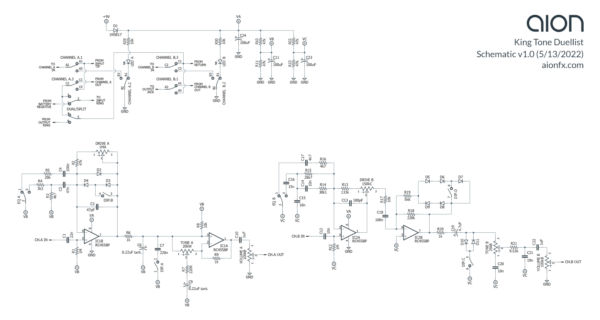 No real surprises: the String-Singer (side A) is a bufferless Tube Screamer with a few mods. The toggle switch selects between different configurations of R-C filters off the feedback loop of the op-amp, to add more of a bass emphasis (Fat) or more of a treble emphasis (Glass) before the clipping occurs. The “Warmth” DIP setting is a classic Tube Screamer mod where a second 220n hi-cut capacitor is added in parallel with the pre-tone hi-cut capacitor, which shifts the fixed hi-cut frequency downward. (The legacy Stratus has an option for this mod, but I’ve always felt it was somewhat less than useful since the mod essentially just lowers the maximum amount of available treble. If you want less highs, just turn the tone knob down a bit!) The second DIP switch setting adds one more diode to the clipping pair for asymmetric mode, like the Boss SD-1.

The Heavy-Hand (side B) is a Bluesbreaker, but with a similar Fat-Stock-Glass toggle switch as the String-Singer that selects between R-C filter combinations. For DIP switches, it also has asymmetric diode mode (which adds another diode to one of the series pairs in the soft clipping section) as well as a hard-clipping mode taken from the King of Tone.

One thing to call attention to: the Split/Dual DIP switch seems to disable the battery entirely when in “split” mode—which uses TRS cables to allow the two circuits to be used in different positions on the board, patching other effects in between them, or controlling them with a loop switcher.

This makes sense if you think about it. In standard pedal wiring, the input jack is a stereo jack, and the battery connects to the ring. When a mono plug is inserted, it shorts the ring to ground and the battery provides power to the circuit. When the input is disconnected, the battery circuit is broken and it doesn’t drain.

So: the battery ground needs to connect to the ring of a stereo jack or it will drain very quickly and basically be unusable. This ring connection is also needed for the “send” functionality between the two effects in split mode. It makes sense that the battery would need to be disabled in split mode—which is an advanced use case that probably means it’s part of a professional rig and definitely would be powered with an external supply.

The only problem is, I couldn’t find any references whatsoever to this side effect, either in official documentation from King Tone or user comments on various forums, and it seems important enough to be worth mentioning. I am pretty sure we traced it correctly—though again we didn’t desolder anything, and I no longer have the pedal to be able to confirm the functionality. Since our version uses a much more elegant solution with 4 jacks, and also does not use batteries, I wasn’t terribly concerned with the split/dual mode when we originally traced it and didn’t really pay much attention to the implications until I put together the tracing journal. But if anyone has one and can confirm that the 9V battery does not work in split mode, please let me know!

First released in 2020, the Soloist is side “A” (String-Singer) of the Duellist. It’s no secret that it’s based on the Tube Screamer, but its modifications are significant enough that depending on the control settings, it can either sound nothing like a TS or exactly like one. As with the Duellist, the PCB layout is very tidy and easy to follow and it did not require any desoldering to trace. 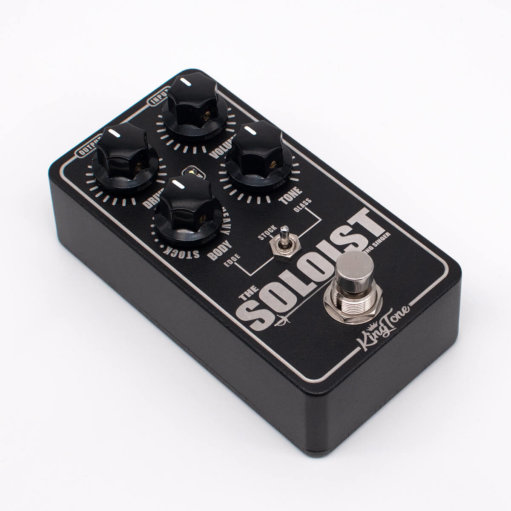 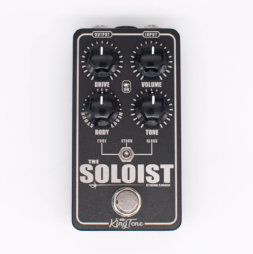 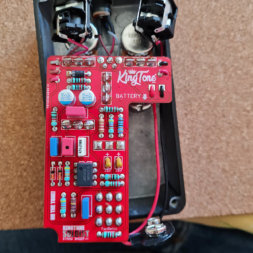 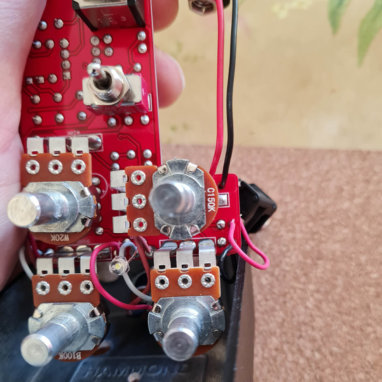 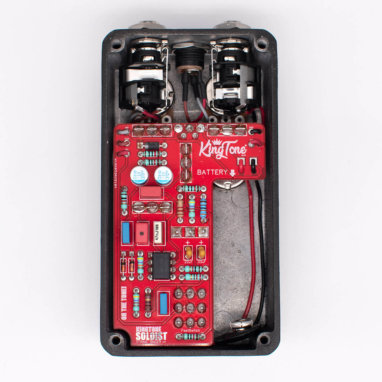 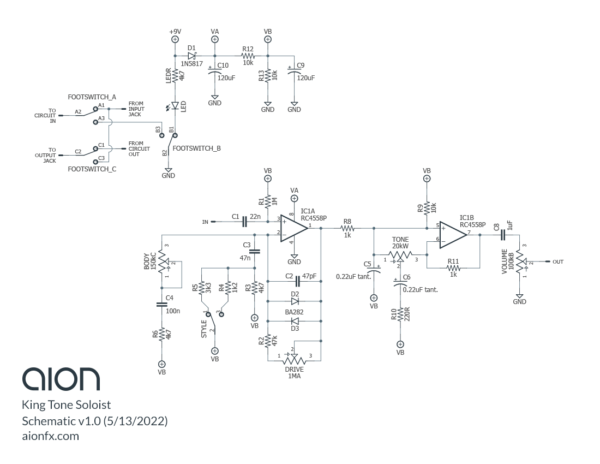 This is a pretty straightforward adaptation of the Duellist’s side A, but with a few changes. It has four knobs, with the “Body” potentiometer replacing the “Fat” mode on the toggle switch, allowing for variable bass/fullness, gradually blending in the fat mode rather than it being all or nothing. With the removal of the Fat mode, a new mode called “Edge” has been added to the toggle, which is treble-focused but not as sharp as the “Glass” mode. The other difference is that the internal DIP switch has been removed, so the “Warmth” and “Asymmetric” modes from the Duellist are unavailable.

First released in 2021, the Heavyhand (sometimes rendered as Heavy Hand) is side B of the Duellist. However, as with the Soloist, it’s not an exact copy. While it does share the core circuit in common, the Duellist is capable of some modified tones that the Heavyhand can’t match, and vice versa. 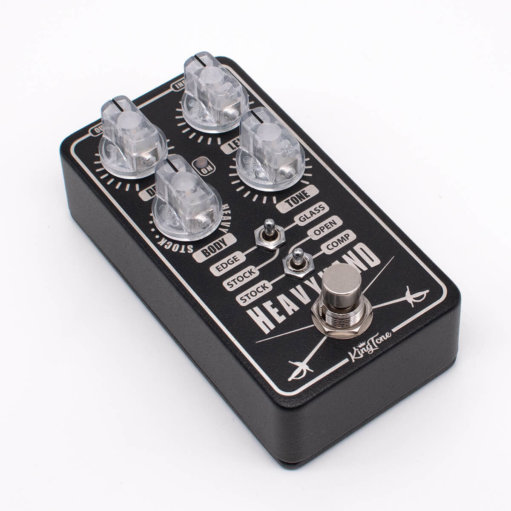 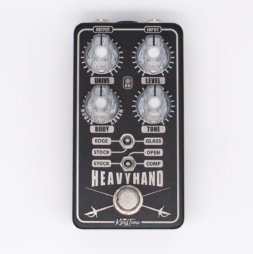 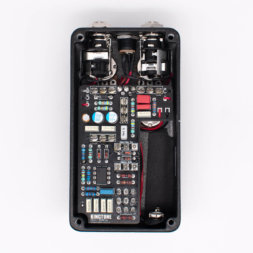 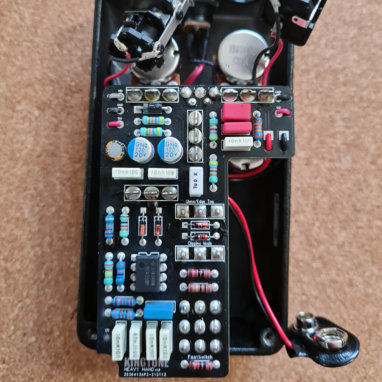 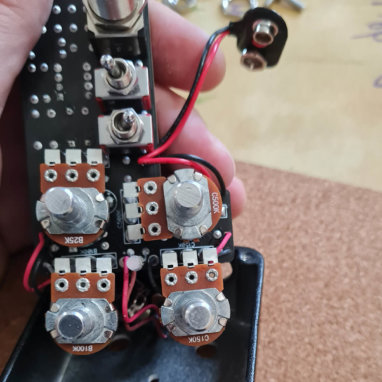 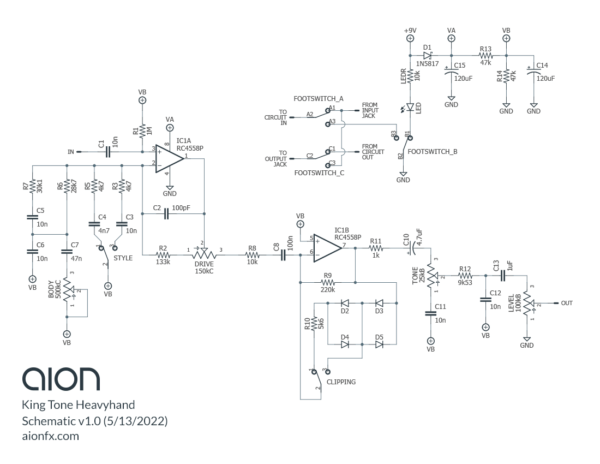 The Heavyhand is very similar to side B of the Duellist, but it packs in even more added mods & options than the Soloist. Like the Soloist, it has an extra “Body” potentiometer which replaces the “Fat” setting on the toggle switch, and “Edge” mode has been added to the toggle. Here, though, a second toggle has been added that selects between different combinations of clipping diodes (1x in each direction, 2x in each direction, or no diodes).

Notably, none of the diode settings are asymmetric, which was a mode available on the Duellist via an internal DIP switch. It’s also missing the hard clipping mode, which the Duellist does have (along with the King of Tone and Prince of Tone). 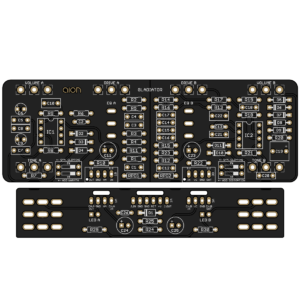 The Gladiator Dual Drive is a direct clone of the pre-2022 Duellist, only differing in its wiring and jack layout. The original Duellist allows for patching pedals in between the two channels, reversing the order, or using them completely separately via the use of TRS splitter cables. The Gladiator adds two additional jacks for send and return, so the same functionality can be achieved without using external cables. If nothing is plugged into the send/return jacks, the loop is disabled, so no internal DIP switches need to be adjusted to use this feature—it’s all automatic. 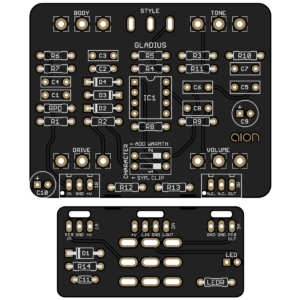 The Gladius Dynamic Overdrive is based on the King Tone Soloist, with the asymmetric clipping and warmth modifications brought over from the Duellist (features not found in the Soloist). These are available internally as DIP switches. 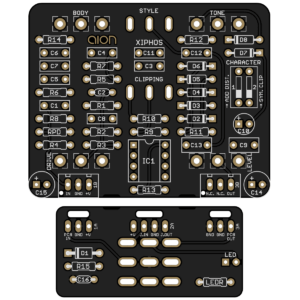 The Xiphos Amp Overdrive is based on the King Tone Heavyhand, with additional modifications brought over from the Duellist that were not on the original Heavyhand. It has the same diode selector switch, but an additional diode has been added in one direction along with a DIP switch, so that both clipping diode modes are asymmetric. (This has no effect in the middle diode-lift mode.)

It also has an option for diode-to-ground hard clipping, also via an internal DIP switch. Since the hard-clipping mode has a low clipping threshold, the external diode selector switch won’t have as much audible effect when the hard clipping is enabled.