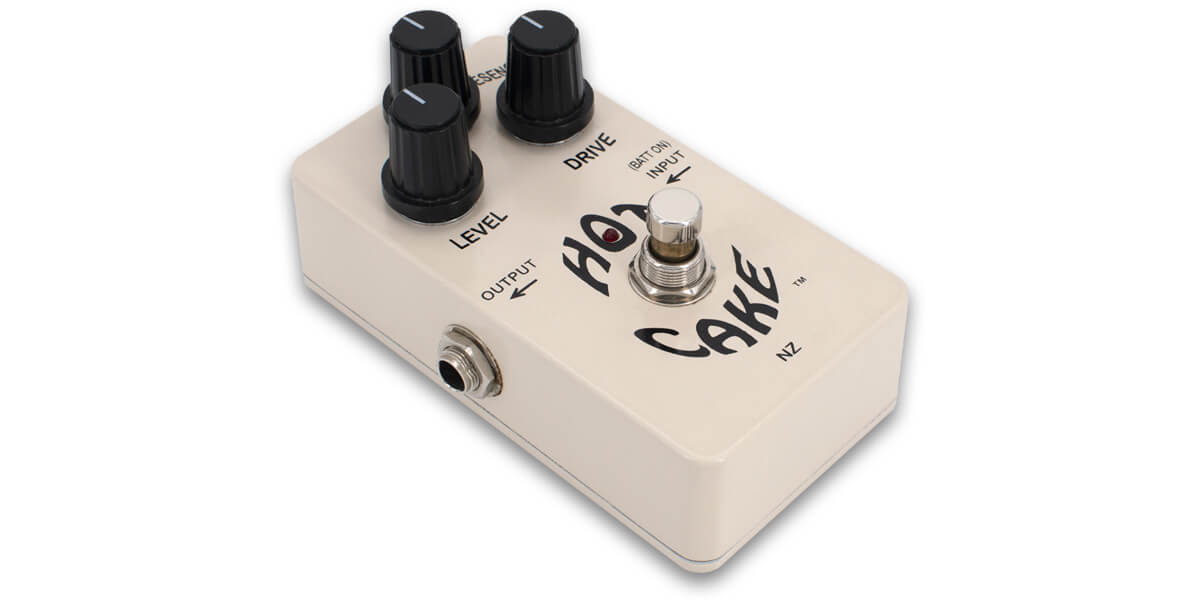 Here’s an interesting one. The Crowther Hot Cake is one of the original boutique distortion pedals, dating all the way back to 1976. They’ve been hand-built by Paul Crowther in New Zealand for the past 44 years. And while it’s been a staple in the DIY community for awhile, only two of the major versions (out of at least 6 total) have been traced—an early unit from the 1970s and a modern one from 2003.

For awhile in the mid-2000s, the Hot Cake was available in three different variants: stock, “Bluesberry” and “XLF”. Bluesberry softens the distortion somewhat for a smoother clipping sound. XLF (extra low frequency) allows lower bass frequencies to pass through, making it better suited for bass or down-tuned guitars.

In 2008, Crowther updated the circuit to add two internal toggle switches, one to engage XLF mode and one for Bluesberry mode, so only one model was produced from that point forward.

The thing is, no one had ever taken apart an XLF or Bluesberry model, so we thought we could settle a few different questions at the same time by tracing the 2008 revision. 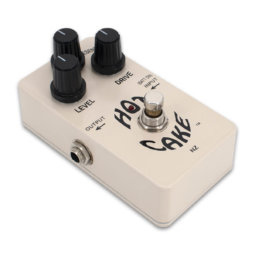 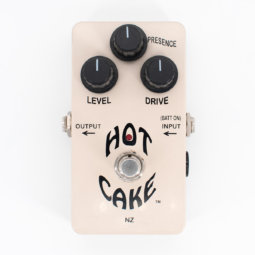 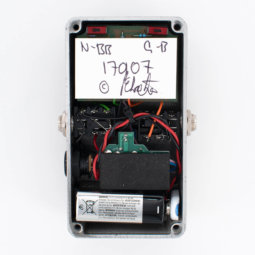 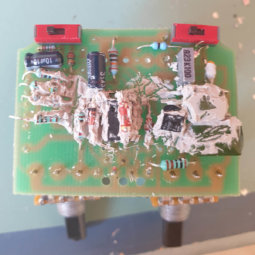 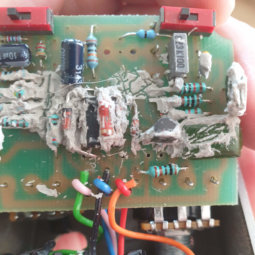 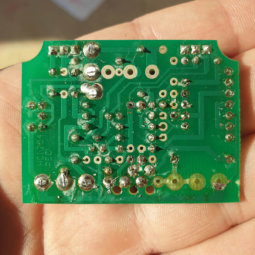 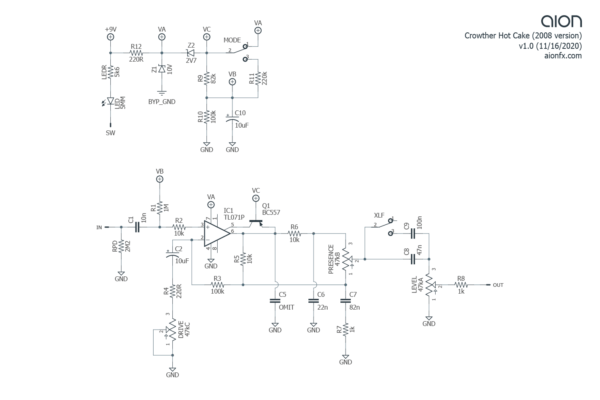 Note that C5 is present on the PCB, but was unpopulated in the unit we traced. This is a 470pF capacitor in previous versions of the Hot Cake.

Also, not shown here is the relay switching system from the original. The five components connected to ground in this schematic (Drive pot, Level pot, C5, C6 and R7) are actually connected to a switch, and when the effect is engaged, they are grounded. When it’s disengaged, those components are left floating, so it essentially turns the whole signal path into a unity gain buffer with very little frequency-shaping. These connections are shown in the 2003 schematic, with a similar non-relay version in the 1977 schematic, both traced by Analogguru.

Other than that, as you’d expect, it’s pretty similar to the previous versions of the Hot Cake—but this is the first time I’ve ever seen an op-amp’s offset null feature (pin 5) used in a pedal design.

I know when I’m over my head, so I turned to DIYStompboxes to see if someone there could help. Here’s an explanation from Rob Strand:

The way it works is when the output rises on the positive swing it lifts the emitter of the PNP transistor. When the output reaches 0.6V above the voltage set on the base a collector current flows into pin 5.

One thing this method does is clip the opamp *without* the opamp’s output stage saturating against the positive supply rail. That probably leads to much cleaner clipping.

The purpose of the zener is give to a reference voltage which is 2.7V below the positive rail. When the base of Q1 is connected to +V, Q1 is disabled and the opamp clips naturally. When the base of Q1 connected to the zener the opamp will clip cleanly like I described before at a voltage 0.6V above the voltage on the zener – ie at 2.7 – 0.6 = 2.1V below the positive rail. The zener voltage is probably purposefully chosen so the Q1 circuit can control the clipping *without* the IC clipping. 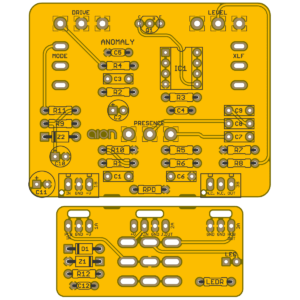 Releasing today is the Aion FX version of the Hot Cake, called the Anomaly Vintage Distortion. Aside from the conversion to true bypass, everything else has been kept the same, with the internal slide switches being converted to external toggle switches.