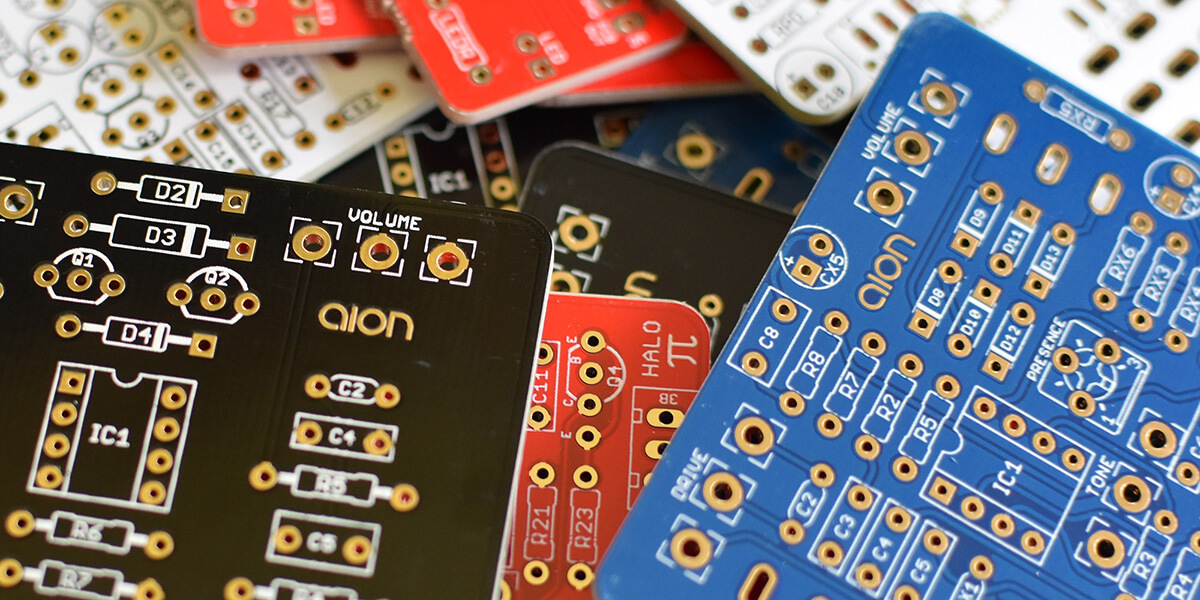 As 2019 begins, I wanted to look back on last year and then talk about what’s coming.

First, a caveat: I wrote a similar post last year, and about one week afterward I had the initial idea for the kits. Because of this, my projection looking ahead to 2018 was missing some very key information to say the least. But that’s how it goes: all the best things to happen, whether in life or business, are things that you aren’t able to predict!

So with that said, here are the highlights of 2018.

As part of the transition to the kits, I needed to unify my platform. The kits had to be designed in a very specific way to make them as user-friendly as possible, and I didn’t want to have separate layouts for kits and PCB-only projects, so I had to develop a new format for PCBs that would work either as full kits or standalone projects.

This involved moving to the 125B enclosure format and using top-mounted I/O and power connectors. Now, not only are the pedals easier to build with more space inside, they actually take up less space on a pedalboard than a 1590B with side-mounted jacks.

The major advantage to this is that any PCB from now on can easily be converted into a kit without additional design work. I don’t intend to do kits for all of my projects, but it’s good to have the ability to keep an eye out for the most popular ones (which I often am not able to predict) and to be able to put my kit-development effort into the ones that will have the most impact.

My big goal this past year was to release 25 projects in 2018. If you count the re-releases and the kits, I ended up at exactly 25. It didn’t look like I envisioned when I wrote that—there were only seven brand-new circuits in the lot—but I’m still beyond thrilled with where things ended up.

In 2018 I re-released a total of 12 old projects in this new 125B format. It was a lot of fun revisiting the classics. Many of them were among the first projects I ever designed back in 2013, and coming back to them with five more years of design experience, I was able to make them better than ever. I approached them as though they were all-new projects, doing new research and re-writing the documentation from scratch to bring them up to the standards of the other new ones.

Many of them have new features, like the Halo (Big Muff) with its mid scoop/flat/hump switch, or the Refractor with the buffer/true bypass switch. And many of them have had features removed in favor of making a more streamlined build without having to go through a complex decision tree to decide which options you want.

I also began doing Mouser parts lists for all of the new 125B circuits, linked from within the documentation. Ordering parts is a breeze, and again, it reduces the number of decisions someone will have to make when starting on a project.

So, this is the big one of the year. I had the spark of an idea at the beginning of January, and then spent the rest of the month writing notes, brainstorming, and creating a plan that would take the remainder of 2018 to execute.

I didn’t want to do kits if it was only going to be a convenience service where I buy all your parts for you. This is, in my view, what most DIY kits are these days. But even if people wanted to pay me good money for it, that’s not how I want to spend my time.

Instead, my goal was to use it as an opportunity to innovate and do something exciting. For the average DIYer, it isn’t feasible to order parts direct from manufacturers in quantities of 1000+, so they’re stuck using only the parts that are currently available from suppliers like Small Bear. And this becomes a chicken-and-egg scenario here where the suppliers only order parts that the average DIYer would want because it’s less risky. As a result, there’s not much large-scale innovation. With a few exceptions, DIY guitar pedals today are still being built the same way they were 20 years ago.

So with the kits, I wanted to re-imagine how pedals should be built if we weren’t constrained to a narrow list of parts & supplies. For instance, most people share my view that wiring is the most tedious and frustrating part of pedalbuilding. But if I can source a custom-made, pre-tinned wire assembly for around the same cost as a capacitor, it becomes just another component and I can eliminate the wiring step altogether. No more stripping wires and cutting them to length—it’s over. Now you solder the wire assembly to one board like any other component and just snap it into the header on the other board when you’re ready.

Or how about expecting people to learn to read resistor color codes? Again, it’s frustrating, time-consuming and error-prone. But if I’m sourcing all my own resistors, I can find a manufacturer who can print the alphanumeric value on each resistor rather than the color code. And while they’re at it, they can make them 0.5% tolerance and audiophile grade, so they’re not just unique in appearance, they’re actually better quality than any resistors you can buy in DIY quantities from component suppliers.

Those are just two examples out of half a dozen to illustrate how I wanted my kits to be different. The broad vision for Aion FX kits is that they should be fun to build, reliable, and professional-looking. The feedback for the kits has been overwhelmingly positive, and has mainly revolved around those three aspects—which means people have caught my vision. It’s been a huge success, and I’m excited to continue innovating in this field.

Maybe there will be something I didn’t see coming, like this past year. We’ll see. But right now, here are my three major initiatives:

PCBs are the lifeblood of Aion FX, and as of right now this is my top priority for the year. I currently have around ten new brand projects that are fully designed, with boards in-hand just awaiting their turn in the prototyping queue, so keep an eye out for lots of activity on this front in the next two months. Later this year I’m going to shift my focus away from drive circuits and dive deeper into modulation and other interesting effects.

Also, as I mentioned earlier, I re-released a dozen older projects in 2018. Expect to see more of that too. Eventually my top 70-80% of projects will be updated for the new format. There are a few projects toward the bottom of the list that only sell maybe ten or twenty PCBs a year, and those likely will not see a redesign, but the majority of them will. (Don’t worry—as projects are redesigned, the legacy 1590B versions will continue to be available for as long as people are interested.)

So far, I’ve released six kits. I expect to release a minimum of ten more this coming year. (Hopefully even more than that, but better to under-promise and over-deliver.)

I intended to do a website redesign last year, but that project got bumped by the kits. This year it’ll happen though. I’ve already mapped out most of it and have a ton of exciting ideas, but it’s just been a matter of priorities.

And a word of thanks

In late 2017, I was able to cut my hours at my day job to focus on Aion as more than just a hobby or side project. 2018 was my first full year devoting 20 hrs per week to Aion, and it was both enjoyable and tremendously successful. Your support has been greatly appreciated and I hope to spend 2019 contributing to the DIY community more than ever before!