Articles about a range of topics including electronics skills, history, and design principles. 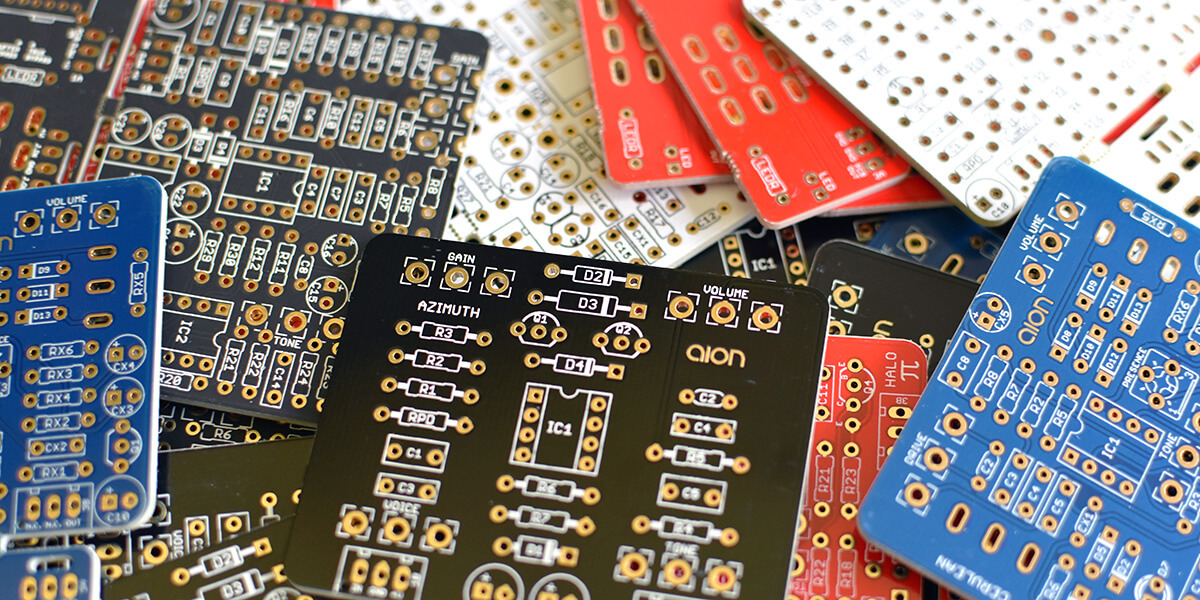 If you’re going to build pedals in any sort of quantity, you’re going to want to use manufactured PCBs. Don’t try to etch your own if you’re building more than a couple—PCB manufacturing prices are so low that it’s seriously not worth your time. Plus, manufactured PCBs are more reliable (especially if you PCB-mount your pots and switches intelligently) and much more professional.

Designing your own pedal and PCB layout is way beyond the scope of this article, but I wanted to recommend a few sources for ready-made PCB projects from other people in the DIY community.

Brian was one of the innovators in the ready-to-solder PCB market and remains the best there is. He changed his license terms in early 2013 to allow his projects to be used commercially in any quantity.

What does he do best?
Wide selection of really cool projects. Lately he’s been doing a number of complex vintage circuits like some obscure Electro-Harmonix stuff and the Uni-Vibe. He also has some original circuits as well. Newer projects use board-mounted pots and switches with good control layouts. Great documentation and great discussion forums.

Barry Steindel started off a few years ago etching all the boards himself, but lately he’s moved into manufactured double-sided layouts for his PCBs.

What does he do best?
The prices are great. Most projects contain original modifications to the circuits, so they’re less direct clones than “inspired by” circuits. He also sells kits through Pedal Parts and Kits.

What are the downsides?
Barry is legit, but the website is busy and difficult to read and lots of people are a little put off by his infomercial writing style. PCBs do not use board-mounted pots and switches (though this is just a matter of taste—some people prefer offboard for everything). The layouts and documentation aren’t tremendously professional, and a lot of times they’re just “inspired by” a well-known circuit so it can be difficult to build an exact replica of the circuit if that’s what you’re after.

JD Sleep has been a part of the DIY scene for a very long time. GGG was one of the first sites to offer manufactured PCBs to the DIY community.

What does he do best?
He has a very wide selection of vintage circuits, with lots of fuzzes especially. Some of his layouts, like the Neovibe, were designed by RG Keen. Most of the circuits have modifications in the documentation if you want to tweak things. He has sales every month. He sells the full kits or just the PCBs by themselves. Documentation includes the proper voltages for ICs and transistors which helps in troubleshooting.

What are the downsides?
New projects are pretty rare. PCB layouts are sometimes a lot larger than they need to be, and the pots and switches are not PCB-mounted.

Tonepad is the website of Francisco Peña, a DIY enthusiast from El Salvador. It’s one of the longest-running PCB project sites out there, having started in 2002.

What does he do best?
All of his projects have toner transfers in case you want to etch them yourself for personal use. If you want to use it commercially, though, you have to buy the PCBs directly from him. The layouts are very compact and well thought-out.

What are the downsides?
No new projects since 2009, though he has switched over to using manufactured PCBs recently which is an upgrade. Documentation is minimal with most of the modifications contributed by users in the build reports. PCBs and schematics do not have part numbers (though the values are clearly printed on the silkscreen).

BYOC is a little different than the others since they sell full kits. However, they have lately started selling the PCBs by themselves as well as some components.

What do they do best?
Kits. If you’re a beginner, you can save yourself the hassle of sourcing parts yourself and buy everything in one place at very reasonable prices. The documentation is great with step-by-step instructions for those who have never done it before. There’s a wide selection of projects, including some that no one else offers such as the Boss Slow Gear. The BYOC forums are fantastic—they are by far the friendliest and most inviting community out there.

What are the downsides?
The control layouts are sometimes a bit strange. It’s tough to make the final product look professional if you’re building them for others. They began offering finished enclosures a few years ago, but the graphics aren’t very high-quality.

There are a few other smaller PCB sellers who have started up in the past year or two, mostly DIYers who made some cool stuff they wanted to share. I have not ordered from any of them so I can’t offer a review, and they may not all allow commercial licensing, but I wanted to mention them here because they have some interesting projects and are worth a look.