Based On
Jumbo Tone Bender
Effect Type
Fuzz
Build Difficulty
Easy
Project Summary
The silicon successor to the classic Macaris germanium fuzz pedals of the late 1960s, the Jumbo Tone Bender and its variants were actually adapted from the Big Muff Pi. 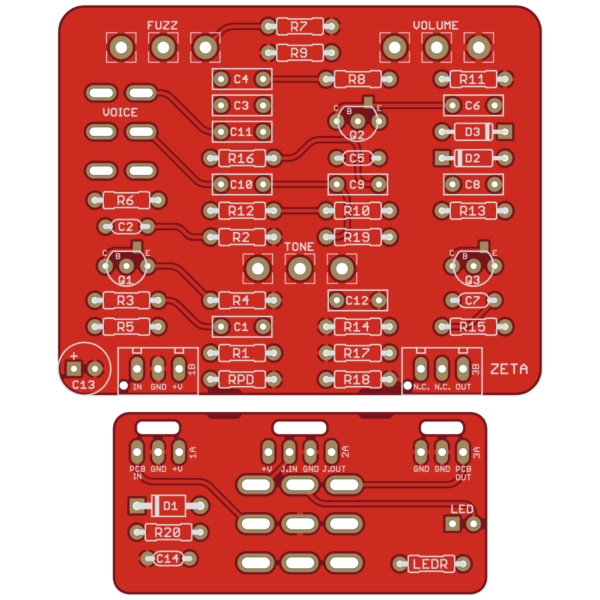 The Zeta Distortion/Sustainer is based on Colorsound’s 1970s-era “redesign” of the classic Tone Bender, a series of revolutionary germanium fuzzes that were first designed in the late 1960s.

However, while it shares a name with the earlier germanium Tone Benders, under the hood it’s a completely different circuit that is actually adapted from the Electro-Harmonix Big Muff Pi. The main differences are that the second stage has had the clipping diodes removed and the post-tone gain recovery stage has been dropped entirely.

With minor part differences, Colorsound sold the circuit under the names Tone Bender Mk. IV, Supa Tone Bender, and Jumbo Tone Bender, and they also produced it for Barnes & Mullins (B&M) as the Fuzz Unit. The last of them were produced in late 1980. In the 1990s, Colorsound also created a vintage-inspired semi-reissue called the Bass Fuzz. They never had a vintage product called the Bass Fuzz, but it’s the same basic circuit as the 1970s pedals, just with all the capacitor values doubled.

The default parts list for the Zeta is from a 1976 Jumbo Tone Bender, but component values are provided for each of the other variants and any of them can be built using this PCB. There’s also a switch that changes out two components to simultaneously increase the gain of the first stage and change the frequency of the tone control. More on this in the build documentation.