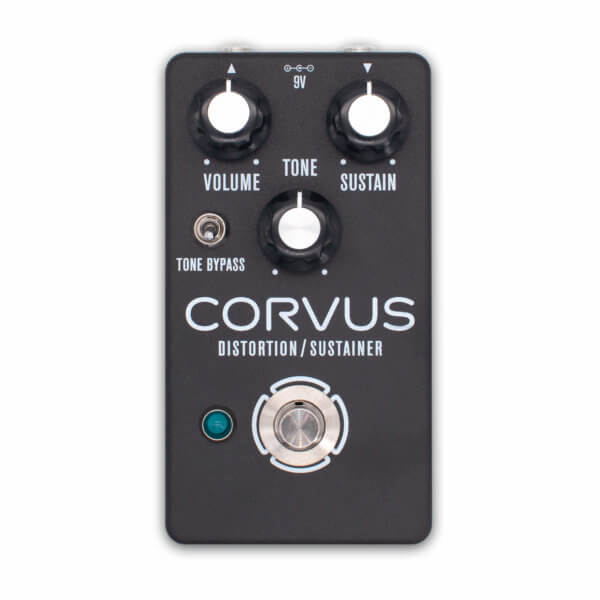 The Corvus Distortion / Sustainer is a clone of the 1977-1980 “op-amp” EHX Big Muff Pi, a redesign of the classic Big Muff circuit using op-amps instead of transistor gain stages. It was designed by Howard Davis, a brilliant EHX engineer who also invented the Memory Man delay and Electric Mistress flanger as well as the Deluxe Big Muff Pi.

He was tasked in the redesign with getting a similar sound to the Big Muff, but the circuit itself bears no resemblance to the earlier 4-transistor circuit apart from the tone control. Therefore, while it was the only commercially-available version of the Big Muff for several years, today it’s seen as a fully separate circuit. (In 2017, EHX reissued this version of the Big Muff, formally adopting its formerly unofficial name, the “Op-Amp Big Muff Pi”.)

The Corvus is based on the 1978 revision of the Big Muff, which added a “Tone Bypass” switch. As inferred by the name, this switch fully bypasses the tone stack for a more raw and aggressive sound.

The Corvus is a direct adaptation of the 1978 circuit except for the inclusion of an optional modification to the gain control, originally conceived by Analogguru. This converts the op-amp configuration into a variable gain stage, whereas the stock unit uses a fixed gain configuration followed by a volume control. With this modification, the op-amp isn’t amplifying the signal any more than it needs to. However, the original version can also be built if preferred (see build notes for details).

The op-amp Big Muff Pi is a complete redesign of the classic Big Muff Pi circuit that uses op-amps instead of discrete transistors. It was designed by Howard Davis and Michael Abrams. While the sound and overall design concept is similar, it’s by no means a replacement for the original, even though at the time it was released it was the only version that was available in stores.

The op-amp version is considered to be the fourth version of the Big Muff. It’s been described as having a harder edge, more of a “grinding” sound than the original which is smoother. It’s most well-known as the pedal behind the guitar tone on Smashing Pumpkins’ 1993 album Siamese Dream.

There were actually two versions of the op-amp Big Muff Pi. The version from 1977 into early 1978 (version 4) had three knobs just like the original. In 1978, they revised the circuit to have a “Tone Bypass” switch which, when engaged, disables the Tone knob and routes the signal around it, causing the output to increase and making the tone even more “in your face”. The tone bypass version is considered Version 5.

There were two versions of the Deluxe Big Muff Pi. The first version, labeled EH-3053 on the schematics and PCB, had a “Blend On/Off” switch allowing you to bypass the Soul Preacher portion of the circuit. With this switch off, it was essentially a ’77 Big Muff Pi, but using a +/-5V bipolar circuit rather than a standard 9V, with parts changed to match. The second version, labeled EH-3054, replaced the Blend switch with a Parallel/Series switch allowing you to either use the two circuits in blend mode (like the previous version) or with the Soul Preacher going into the Big Muff.

The Soul Preacher portion of the circuit was also different between the two versions, with the “Blend On/Off” (3053) version using a near-direct copy of the actual Soul Preacher with discrete transistors, and the “Parallel/Series” (3054) version adapting the redesigned Soul Preacher that use sthe CA3080 chip. The first version is widely considered to be the better of the two. 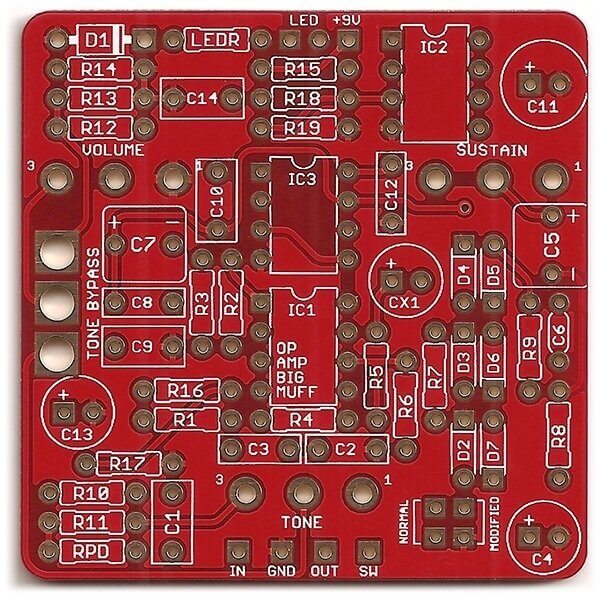