Based On
BJFe Little Green Wonder
Effect Type
Overdrive
Build Difficulty
Easy
Project Summary
A very unique adaptation of the classic Tube Screamer circuit, this pedal is seen as a secret weapon for rhythm work by some guitarists such as Jeffrey Kunde.

Not yet available.
Kits are developed based on interest, so if you’d like to see one for this project, let us know.
Request Kit
32 people are interested.

The Viridian Dynamic Overdrive is based on the BJFe / Mad Professor Little Green Wonder, an op-amp drive that can be viewed as BJFe’s take on the Tube Screamer.

The BJFe Little Green Wonder was first released in 2003. Only 117 units were ever produced, so the original BJFe version is extremely rare.[1] Later, in 2007, Mad Professor Amplification of Finland released the Little Green Wonder under license from BJFe, the first of many licensed designs that would follow. The BJFe version had undergone a few minor tweaks throughout the small run, and the Mad Professor version was based on the final version, which was the one that Bjorn was most happy with.

The Viridian is based on the Mad Professor version of the Little Green Wonder. The only modification is the inclusion of two optional tapering resistors so that a more common 100kA dual potentiometer can be used for the tone control.

The tone control is very unique and requires some explanation. It uses a dual 20kA potentiometer to control the tone in two stages of the circuit at once. (The earliest of the BJFe-built versions used linear taper, but it was changed to log before very many units were produced and before the Mad Professor version.)

The first half is pretty standard: a control that affects the low-cut frequency of the first gain stage. At the low end, the bass content is highest, and as you turn it up the bass is gradually cut. This is similar to the bass control of a Zendrive or Timmy.

The second half is odd, and in fact Aion FX traced an original LGW to verify that the existing schematics available online were correct. (They were.) By connecting pins 1 and 3 together, both “halves” of the voltage divider are in parallel with each other. The net effect is similar to the first stage in that it affects the low frequencies, but the curious difference here is that knob positions 0 and 10 are identical. As you turn the knob up from zero, the low-cut frequency goes up (i.e. more bass is cut), but at around 2:00 on the control it hits a peak and then starts going back down before arriving back at the lowest setting again on the far side.

While DIYers commonly split this dual-gang tone control into two separate knobs, understand that the second-stage tone control is very strange on its own and is really designed to work in conjunction with the first stage. It works great as a single knob, but splitting them out is not nearly as useful as it sounds. Therefore, the Aion FX implementation of the LGW circuit stays true to the original by retaining the dual potentiometer.

The earliest BJFe Little Green Wonders used the LF353 IC. However, Bjorn wasn’t satisfied with how it sounded on battery power once the battery dropped to around 8V, so he changed the IC to the TLC272 which sounded better across the life of the battery. For awhile, he included both ICs so the user could change them out on their own, but eventually he stopped including the LF353, although the IC itself has always remained socketed (including in the Mad Professor version) for those who know what they’re doing.

Bjorn maintains that he prefers the sound of the LF353 at 9V, so if you plan on running this pedal solely from adapter power and not a battery, you should consider using the LF353 instead of the TLC272. 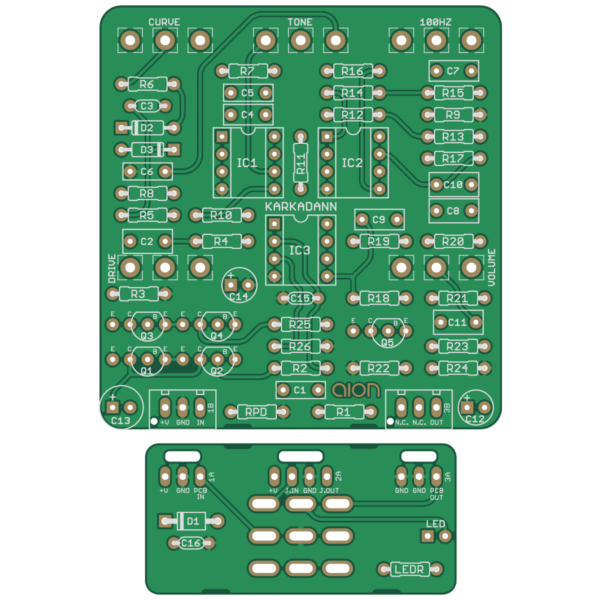