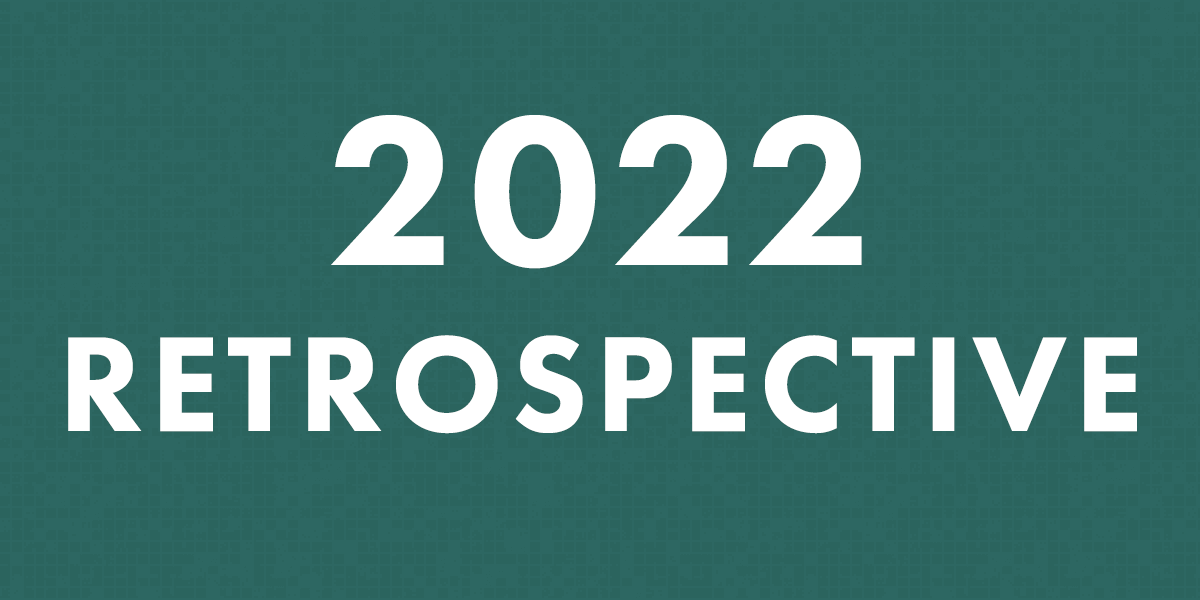 It’s been a whirlwind of a year, but here at the end of it, we’re giving a window into what we’ve been up to and where things are headed. There’s a lot to talk about, so we’ll jump right in.

This is a boring business-speak term, I know, but our day-to-day operations improved significantly this year and it’s worth highlighting!

During all of 2022, we’ve been shipping every day of the week, and even on weekends more often than not. Aside from a few announced days off, nearly every order was in the mail within 24 hours. We don’t advertise fast shipping, but we try to underpromise and overdeliver. It’s a lot better than the alternative.

We’ve also done a pretty great job of keeping kits in stock, despite selling more this year than any previous year. They still went out of stock here and there, but it was rarely more than a day or two before they were back again. (The two Tone Benders, Deimos and Phobos, were the lone exceptions since the initial run sold out faster than expected and the transistor restock was delayed by several months.)

All this is all owing to the fact that we just finished our first full year with two employees. You may remember that in September of last year, my wife Amanda quit her day job so she could work with me. Well, her skills counterbalance my weaknesses in many areas, and it just so happens that these skills include promptness, foresight, and efficiency. Each of those qualities has benefited Aion FX in a tangible way during this past year, and I am tremendously thankful that we get to work together.

The shipping situation has improved greatly this year. It’s hard to believe, but at the beginning of 2022, Australia and New Zealand were still suspending mail from the US and we had to use a relay service to get anything inside those countries. The 2021 holiday season was atrocious even inside the USA, with domestic priority mail sometimes taking a week or longer. But the second half of 2022 was basically back to normal with no significant delays or package losses, and this past Black Friday/Christmas season seems to have gone off without a hitch.

However, with this came a pretty significant increase in shipping costs all around. USPS is charging more for both domestic and international mail, and our shipping costs from suppliers have gone up as well, which raises the overall cost of PCBs and parts. So we’ve had to adjust prices accordingly on a few things throughout the year, most notably our kits, as well as raising our own shipping prices.

Our release schedule was a little lighter than 2021. Last year we released 60 projects in total, counting both PCBs and kits. This year we did 37—coincidentally, exactly the same as 2020.

2021 was definitely an extreme outlier. Our release schedule typically trails the design phase by around a year, so in 2021 we were mostly releasing projects that had been designed during the COVID shutdowns.

Kits also take significantly more time to develop than standard PCBs, and of the 37 new projects this year, 13 were kits—which is more than we’ve ever released in a single year. (More coming in January, too.) And nine more were preamps or dual pedals that also take up more development time than standard PCBs. So overall, we’re pretty thrilled with how things turned out. I hope you were able to find something exciting in the variety!

Another major initiative this year was building up our stock of parts so we can more easily weather the unpredictable supply shortages. In the past we’ve tried to keep our inventory pretty lean, keeping maybe 3 months of stock on hand at maximum. If we can have stuff from Mouser or Arrow in two days, then there’s not much point in letting inventory take up valuable space.

Well: I remember pretty vividly when that changed. I was putting in an order to restock some parts after our big July 4 sale this summer, and noticed Mouser was out of TL072s—yes, TL072s!!—with an estimated restock date of March 2023. I had never seen this happen before, not even close. Other mainstay parts were gone as well: TC1044, LT1054, CD4049, OP07, and more, all with projected restock dates between November ’22 and summer of 2023.

Considering that Aion FX is now our only source of income, it suddenly becomes a very big deal if even a single part in a kit is unavailable. And this impacts hobbyists as well: earlier this year, BBD chips like the 3205 and 3207 were out of stock from all suppliers, so for several months nobody was building any choruses or delays. The same happened with charge pumps and Klon Centaurs.

Because of this, we made the decision to embrace the reality of parts shortages and expand our inventory to a minimum of 12 months of supply. This will ultimately lead to more reliable availability of kits into the foreseeable future. But there’s something else that comes out of this, which leads us to the big announcement. 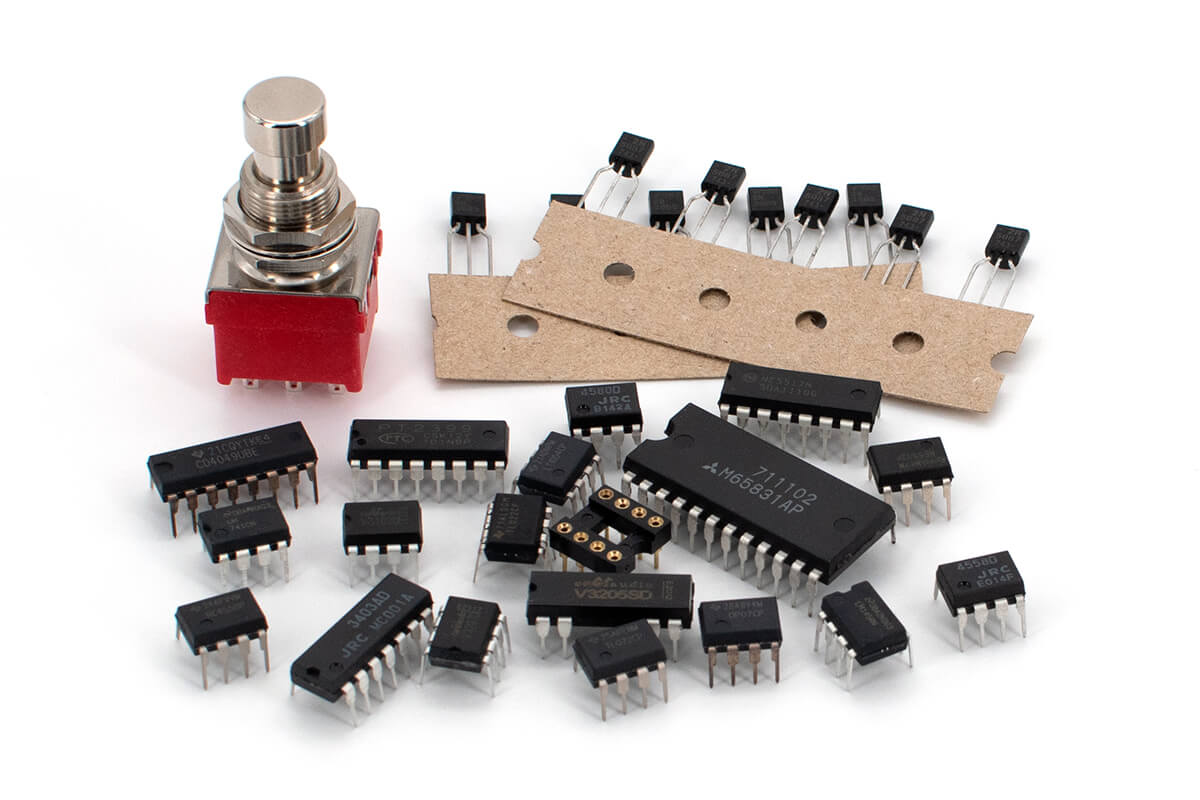 We’re expanding our product line to include components.

(Or, more of them anyway—we’ve been selling JFETs for a couple of years now.)

If we’re stocking up to keep our own supply lines stable, we thought it would make sense to make our stock available to builders for the same reason.

Right now we’re focused on semiconductors since that’s been the main area of supplier shortage. You’ll find a pretty good assortment of op-amps, BBDs, digital delay chips, and a few types of transistors and a new listing page that makes them easy to browse. We’ve also got a top-quality 3PDT switch that’s as good as anything out there—identical specs to the GØRVA Mechano switches, just without the extra-soft actuation force. We’ll be adding more in early 2023 including BBDs and optocouplers from Xvive.

We can’t match the prices of Mouser or Digikey, although we are pretty competitive and we do have solid quantity discounts. But any time you buy from us, you’re keeping your money inside the DIY community and enabling us to serve that community in new ways.

Not as exciting as other announcements we’ve made in the past, I know! But it’s a huge step toward market resilience, and our hope is that it’ll benefit the DIY community in the end. For now, it’s an experiment more than anything, and next year around this time we’ll reevaluate whether it’s been worth the effort.

This past year has been pretty hectic, but we’ve still been designing new stuff when inspiration strikes. The prototyping queue has around 25 PCBs waiting their turn, and we’ve got no fewer than 40 (!) pedals that have been fully traced and are awaiting design.

It could be that some of these traces just get released as schematics and not full PCBs. I don’t want to sit on them for too long and risk drawing comparisons to certain dragons in certain beloved fantasy series. But traces also take a lot longer to release than normal projects when considering the tracing journals we typically include, so unfortunately it can be easy to ignore the stack when things get busy.

We’re also planning on releasing several more kits in the upcoming year, probably between 12 and 16. We don’t have all of these locked in yet, so if there’s something you want to see as a kit, vote for it on the project page. We do pay attention to these votes!

In the short term, as I mentioned earlier, we’ve got a couple more kits coming, and then another PCB release a few weeks later. Things usually get quiet for a bit after the holidays, so we’re looking forward to making progress on some new ideas that have been simmering for awhile.

That’s all for now. Thank you for an amazing 2022! Not a day goes by that we aren’t equal parts amazed and grateful that we get to do this, and we’re looking forward to seeing what the next year has in store.