Based On
TS-808 Narrow Box
Effect Type
Overdrive
Build Difficulty
Beginner
Project Summary
A replica of the very first Tube Screamer from 1979 which used two dual op-amps instead of one. 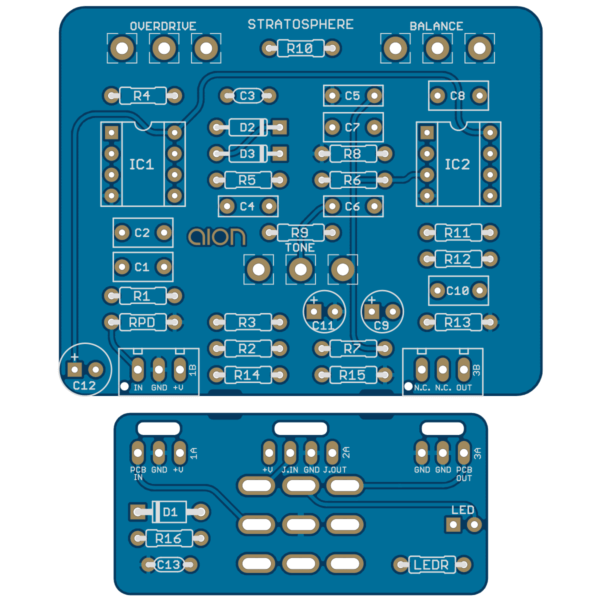 The Stratosphere Classic Overdrive is based on the original Maxon OD-808 and Ibanez TS-808 (narrow box) from 1979. This very first version of the Tube Screamer was only made for a short time, and is notable for its use of two dual op-amps instead of using bipolar transistors for the input and output buffers. The op-amps are MC1458/LM1458, which are very similar in specification to the JRC4558D but not exactly the same

Other than the op-amps, all of the component values are exactly the same, so you probably won’t notice a tonal difference between this and a stock Tube Screamer—but if the Stratus project has too many frills and you want a bit of vintage flavor, this is a great option.

Aion FX traced Maxon’s 35th anniversary reissue of the OD-808 in 2021, and having compared it with photos of original units, we’re confident this is an accurate representation of the original 1979 circuit. Earlier community schematics had errors, with the JFET switching circuitry removed incorrectly and leaving some unneeded parts. The Stratosphere is a direct adaptation of the OD-808/TS-808 narrow box circuit, but with the JFET switching correctly removed and the circuit converted to true bypass.