Based On
Ibanez® ST-9
Effect Type
Overdrive
Build Difficulty
Intermediate
Project Summary
An updated version of the Tube Screamer featuring a frequency-adjustable midrange boost that can be placed either before or after the drive stage.

Not yet available.
Kits are developed based on interest, so if you’d like to see one for this project, let us know.
Request Kit
25 people are interested.

The Cirrus Dynamic Overdrive project is a clone of the Ibanez ST-9 Super Tube Screamer, an incredibly rare Tube Screamer variant only produced from 1983-84. It’s essentially a stock Tube Screamer with an added stage, a semi-parametric midrange control that delivers a fixed boost at a variable frequency.

The ST-9 was introduced near the end of the original run of the 9-series and was quickly discontinued along with the rest of the series. However, the circuit reappeared the next year in 1985 as part of the Master Series, this time called the STL Super Tube. This series had broader distribution and so the STL version is much easier to find.

Curiously, the STL version made one major change to the circuit: transplanting the mid-boost stage after the clipping instead of before, where the original ST-9 put it before. There are no other changes to the circuit, but there is a notable difference between pre-clipping and post-clipping mid boost.

The Cirrus project incorporates both versions, allowing the mid-boost section to be placed either before or after the clipping using an on-board slide switch. (This is the main update from the original 1590B version of the Cirrus, which uses on-board jumpers to set the mid-boost location but can’t be toggled.)

In addition to the mid-boost slide switch, the Cirrus also includes a clipping diode switch so you can select between three different sets of diodes. 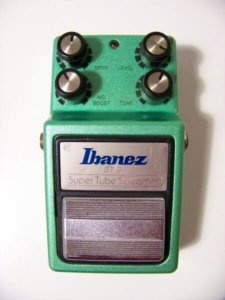 In the early 1980s, the TS-9 Tube Screamer was far from the legendary status it enjoys today. It had been created as a market competitor to the Boss OD-1 OverDrive and would be discontinued in 1984 due to underperforming sales.[1] So when the Super Tube Screamer was introduced in 1983, the designers didn’t think of it as an improvement of the Tube Screamer legend, but a desperate move to continue selling analog pedals when most guitarists were becoming enamored with flashy new digital effects that were sure to become the future.

So the ST-9 was little more than a curiosity and didn’t make any major waves. This is why it’s not surprising that it was only made in very small quantities, and only sold in Europe between 1983 and 1984. (The pedal was also available inside Japan under the Maxon brand name, and even fewer of these exist.) 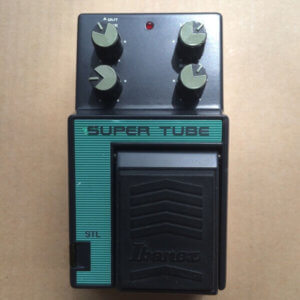 In 1985, Ibanez released the new Master Series line of pedals, which included one called the STL Super Tube. These pedals had a much broader release and the STL did make it into the United States. The promotional literature described it as a Tube Screamer with 2-band EQ, which is somewhat accurate but maybe a bit misleading. In fact, the STL is a ST-9 but with the midrange boost stage coming immediately after the clipping stage instead of in front of it. They could have more accurately called it a two-knob tonestack, but that doesn’t have quite the same marketing ring to it.

Most people who have played both versions prefer the ST-9’s pre-clipping boost because of the way it affects the clipping itself. You can read a lot about the wonders of pre-clipping EQ (this article from Amptone is a great place to start) and this is my preference as well.

In the last couple of years the Super Tube Screamer was reissued by Maxon as the ST9 Pro+. This reissue has not been traced yet, so what follows is all just conjecture on my part. Based on their marketing copy, it sounds like the switch allows you to change the lowpass filter (C7 and R8 on my schematic) for more bass, and at the same time use a different set of clipping diodes. (I would be surprised if the second set of diodes was more than just two 1N914s in series.) A second switch also allows you to go between 9V and 18v operation, the latter being achieved through an on-board charge pump. These Maxon reissues are very good, so I would expect that with the bass switch in “Classic” mode and the voltage set to 9V, it would be identical to an original 1980s ST-9.

The Ibanez ST-9 Super Tube Screamer product manual says that the midrange supplies a +25 dB boost. However, some who have played it have noted that it doesn’t sound like it’s anywhere near +25 dB, and in fact others have calculated it at +8 dB, which seems more accurate.

The STL manual uses most of the same descriptions as the ST-9 manual, but conspicuously omits the gain value from the description—so it’s possible that it was an error that was caught along the way.

If you don’t feel like 8 dB is enough, adjusting the gain boost is pretty easy: just increase the difference between C3 and C4. The only side effect is that in this type of parametric circuit, by increasing the frequency gain, you increase the Q (width) at the same time. If the Q is too wide it won’t sound very good at all.