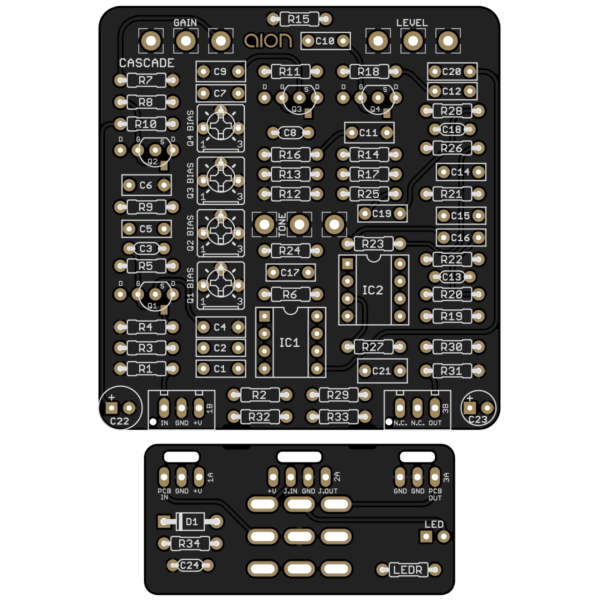 Not yet available.
Kits are developed based on interest, so if you’d like to see one for this project, let us know.
Request Kit
13 people are interested.

The Cascade Amp Overdrive is based on the Washburn® A-D3 Stack in a Box, a drive pedal first released in 1984 and intended to simulate an overdriven tube amp.

This description has become cliche in describing overdrive pedals, but this design was the first we’re aware of that used cascaded JFET gain stages to simulate the topology of a tube amp. There are no diodes: all the drive is created organically. These JFET stages are followed by op-amp gain recovery and tone-shaping, including a Baxandall-style active treble boost/cut control.

In the mid-2000s, JFETs finally caught on as a great way to emulate tubes in small-signal format, and these amp-sim circuits have a remarkable resemblance to this one. However, the Stack in a Box came 20 years earlier than the first of these, so there’s no doubt who got there first. As a result, the design looks remarkably modern—even anachronistic.

It was re-released a couple of years later as the SX:3 as part of Washburn’s “X series”. The appearance is very different, but the circuit is nearly the same as the A-D3. The only change is that the type of JFET was changed from the 2SK30A-GR to the 2SK30A-Y, which has a lower Vgs(off), but the bias resistors have been increased so they clip at roughly the same point.

There have never been any clones of this pedal, although at the time of its release it was also white-labeled under other brand names such as Digiplay, Panther and Stinger and called the “Tube Stack”.

The Stack in a Box is notable as a favorite of Don Morris, the designer of the MXR Phase 90, as mentioned in a 2015 interview by ElectroSmash.

The Cascade is a direct clone of the Stack in a Box, initially based on the factory schematic but confirmed accurate based on our own trace of both an A-D3 and an SX:3. The JFET switching was removed and some extra power filtering was added, but otherwise it is identical.