Based On
Darkglass® Duality
Effect Type
Bass fuzz
Build Difficulty
Intermediate
Project Summary
A bass fuzz with two distinct voicings that can be blended together in any ratio, from vintage warmth to searing, gated chaos. 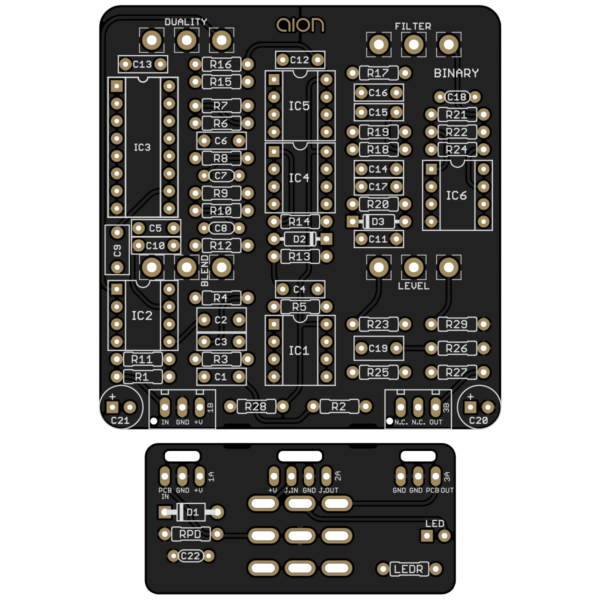 Not yet available.
Kits are developed based on interest, so if you’d like to see one for this project, let us know.
Request Kit
83 people are interested.

The Binary Dual Fuzz is based on the Darkglass® Duality Dual Fuzz Engine, a bass pedal first released in 2013 that features two parallel fuzz paths that can be blended together in any ratio for a variety of textures. It was traced by Aion FX in 2021.

The first path is similar to the Microtubes B3K, a series of CMOS hex inverters that provides a warm, vintage-flavored drive.

The second path is devilishly simple, though extremely rare in guitar circuits. It uses a single op-amp stage configured as a comparator: signal to inverting input, non-inverting input tied to reference voltage, and no feedback path. As the input signal swings above and below the threshold set by the reference voltage, the op-amp converts this to the maximum and minimum voltage (a process called hysteresis), resulting in a heavily distorted and nearly synthesized square wave. The comparator is followed by a primitive two-diode noise gate to keep it quiet when no signal is coming through. These diodes also add crossover distortion.

In addition to the blended fuzz paths, there is also a tone control and volume control that are applied to the fuzz after the two paths have been blended. This is followed by a clean blend that balances the fuzz (after the tone and volume) with the unadulterated clean signal. It’s more complicated than the average drive pedal, but it doesn’t take long to get the hang of it.

The Binary is a direct clone of the Duality based on our own trace, which is covered in our tracing journal. Some extra power filtering has been added, but otherwise everything is true to the original. 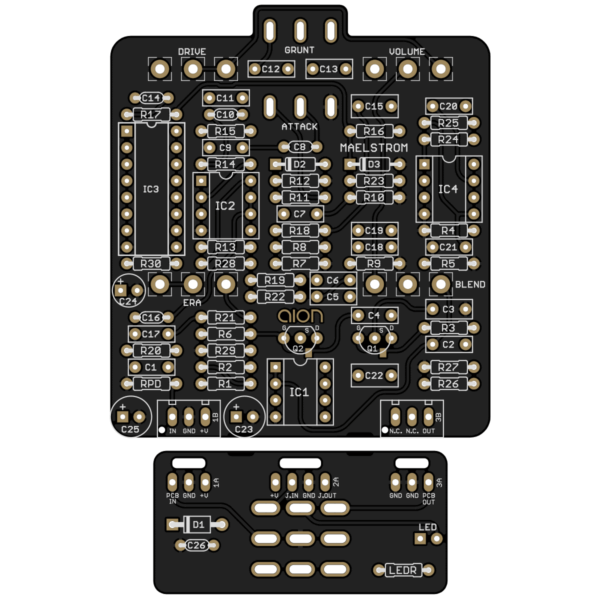