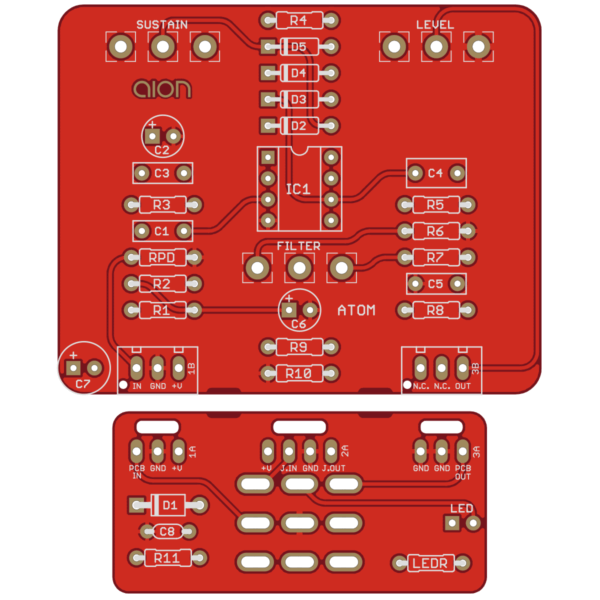 The Atom Fuzz Drive is based on the Fuzztone, a DIY project from a British magazine called Electronics Today International (ETI) in their May 1993 issue. It was designed by Dan Coggins, who would go on to co-found Lovetone only a couple years later, and eventually Dinosaural. The PCB for the circuit was included along with the magazine. It was never available as a commercial product.

Despite its name, the Fuzztone has more in common with an overdrive than a fuzz, using diodes in the feedback loop of an op-amp to generate clipping, similar to a Tube Screamer. (Although it should be noted that the 1978 op-amp version of the EHX Big Muff does the same thing.) The tone control is a “balance” type, again similar to the Big Muff, so perhaps the fuzz vs. overdrive categorization is not so clear-cut.

The Fuzztone also bears a very strong resemblance to the Yamaha OD-10MII, a fairly obscure overdrive pedal from 1987. They sound nothing alike due to component selection, but the structure of the schematic is very close. There is no indication that Dan was aware of the OD-MII or that it informed his design of the Fuzztone, but credit where credit is due, and Yamaha’s pedal was definitely released first.

The Atom is a direct adaptation of the Fuzztone based on the schematic from the article in ETI.