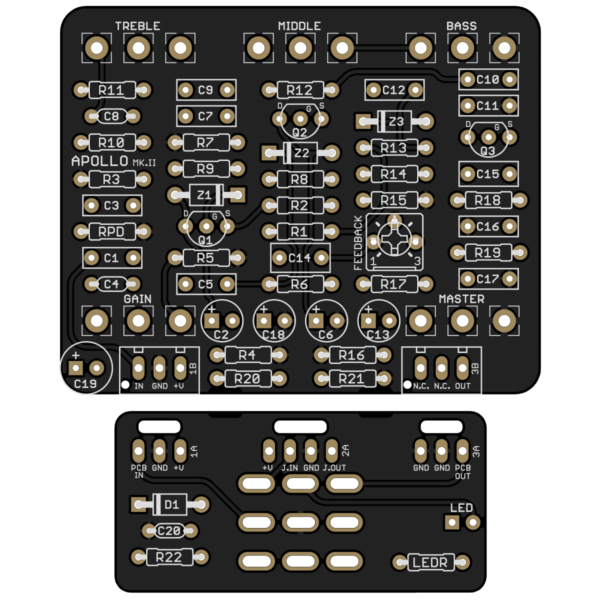 Not yet available.
Kits are developed based on interest, so if you’d like to see one for this project, let us know.
Request Kit
11 people are interested.

The Apollo Preamp Drive Mk. II is an adaptation of the Catalinbread RAH, based on the custom Hiwatt amplifier used by Jimmy Page in Led Zeppelin’s Royal Albert Hall performance from 1970.
The RAH was originally released in 2011 as the “Royal Albert Hall Edition WIIO”. (The WIIO was an earlier circuit that was also based on the Hiwatt amplifier, but voiced for the tone of Pete Townshend from The Who.) After the release of the RAH, the WIIO was discontinued.

The main difference from the WIIO is the tone stack, which was adapted from Jimmy’s amp (called the “Custom Hiwatt 100 Jimmy Page”) and differs somewhat from their standard amplifiers. Like the original amp, the RAH includes a midrange knob for a full three-band tonestack. A few other values were tweaked to re-voice it for Led Zeppelin’s tone, but overall the RAH and WIIO are close siblings.

Due to the use of MOSFETs instead of JFETs, the RAH circuit is stiffer and less compressed than many of Catalinbread’s other amp-based circuits. It has been described as “unforgiving” in this regard, including by Catalinbread themselves. It does generate plenty of its own distortion, but it takes pedals very well and benefits from a boosted or overdriven signal at the input.

The Apollo Mk. II is a direct adaptation of the RAH. The only modification is the addition of a trimmer that makes a feedback resistor variable, allowing adjustments to the gain, tone and feel of the circuit. The WIIO is also available as the Apollo Mk. I.

A bit of trivia: the WIIO and RAH were developed based on recordings of concerts that were held five weeks apart (Led Zeppelin on January 9, 1970, and The Who on February 14).

Important note: According to Catalinbread[1], the WIIO (and thus the RAH and this pedal) should only be run at 9V. It should not be used with an 18V adapter or with the Aion FX 18V bypass PCB. 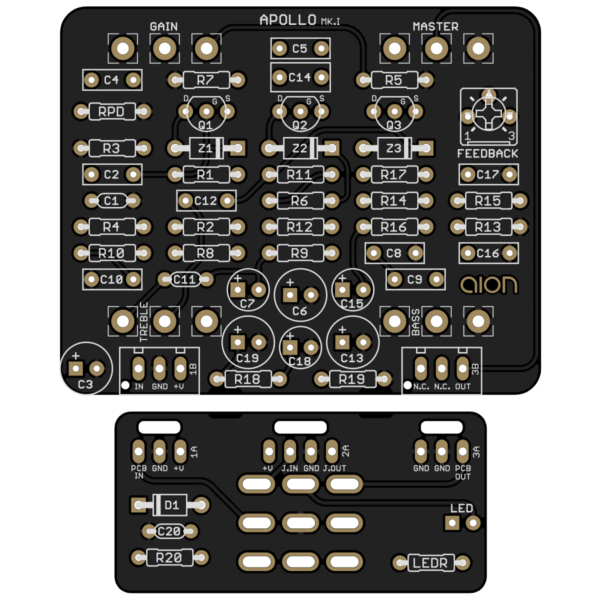