You may notice that this announcement is surrounded by a brand new Aion Electronics website. More on that in a different post—there are three new projects we need to talk about! 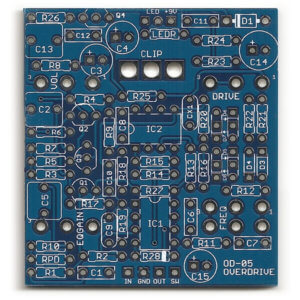 I’m super excited about this one. The Pearl OD-05 is a fairly obscure effect from the early 80’s—a TS-type clipping stage with a cut/boost parametric EQ in front of it. It sounds incredible, and you can wrestle tons of great sounds out of it without much trouble… but it’s never been commercially cloned, and it’s never really grabbed the attention of the DIY community. (It doesn’t help that every schematic out there is incorrect or incomplete.) 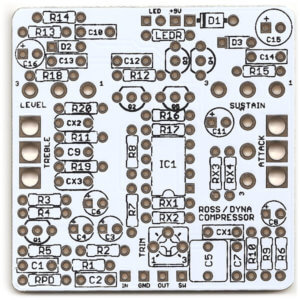 Another big one—the Dyna/Ross circuit holds the distinction of being the most enduring guitar compressor circuit out there in its over 40 year history. This is a particular favorite of mine! You can build a spot-on Keeley Compressor clone with this PCB, and it also has a treble switch mod built in so you can get some really cool 60’s jangly sounds with it. 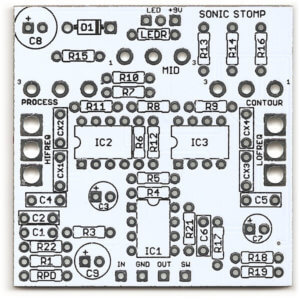 This is a DIY workalike of the BBE Sonic Maximizer / Sonic Stomp. It’s based around a state variable filter that splits the signal into bass, mid and treble and adjusts the phase response of each of them before combining them back into one signal. The effect is similar to an equalizer or the presence control on an amp, but not quite the same as either. Based on the Bajaman “Sonic Stump” project, but with the addition of two switches to control the high and low cutoff frequencies as well as a Midrange knob. 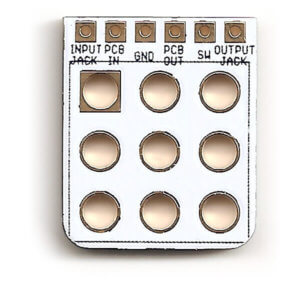 Another new color for the Micro 3PDT Bypass PCBs in addition to red and blue. I plan to add yellow in the coming months so that you can get a bypass PCB that matches any project you order from here. These are the smallest 3PDT bypass boards out there and are only $2 each.

As always, shipping is only $2 to the United States and $4 to the rest of the world, no matter how many PCBs you buy.

I’ve got a whole lot more up my sleeves for 2015. The new projects aren’t going to stop coming, and in fact I have no less than eight PCBs in the queue just waiting to be prototyped and documented, and four more that are in the design process. Ambitious? Maybe. But there are a lot of cool pedals from the 70s and 80s that haven’t really hit the DIY scene yet that I’m excited to introduce. Keep watching!