I mentioned in my last update that you hadn’t seen the last of the new projects for the year. Here’s the latest! 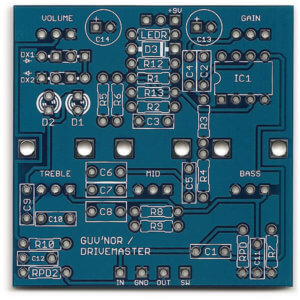 Marshall’s first compact overdrive pedal, which was later re-released as the Drivemaster, has a 3-band EQ alongside standard Drive & Volume controls. This PCB uses compact 9mm pots so the 5-knob layout fits inside a 1590B enclosure. 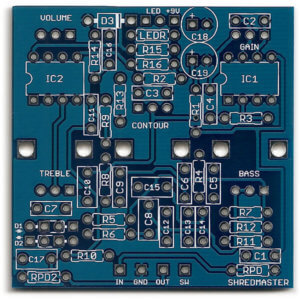 The Marshall Shredmaster is the drive pedal most associated with Radiohead, being used by Thom Yorke and Jonny Greenwood on The Bends and OK Computer. Like the Guv’nor, this layout uses 9mm pots to allow for five knobs in a 1590B. 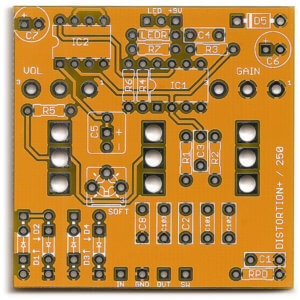 The Distortion+ first came out in 1973 and could be considered the grandfather of modern distortion pedals like the Boss DS-1, Ibanez SD-9 and OCD. It’s a pretty simple circuit, but three switch mods help to keep things interesting. 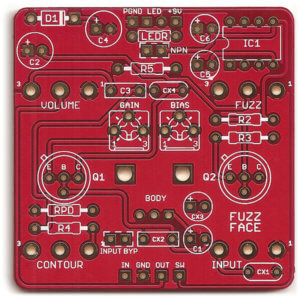 Speaking of grandfathers, the Fuzz Face could be considered the grandfather of the entire stompbox industry, first released nearly 50 years ago. I designed this project to be the end-all Fuzz Face, incorporating every mod I could think of, but without deviating from the legendary tone. 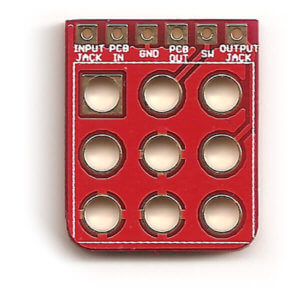 If you didn’t catch my last update, I’ve got micro 3PDT bypass boards available now for only $2 each. The first run was only in blue, but red ones are now available as well. I eventually plan on having yellow and white as well, so watch for those too!

As always, shipping is only $2 to the United States and $4 to the rest of the world, no matter how many PCBs you buy.

Thanks for your support!