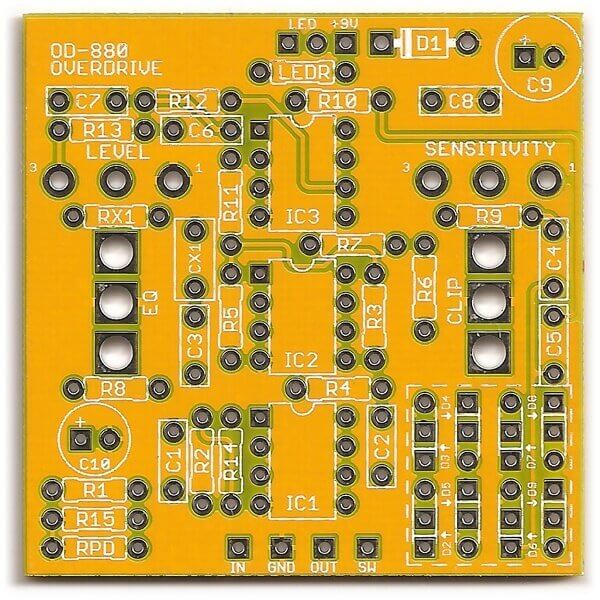 The Quark Overdrive is a clone of the Maxon OD-880 Overdrive / Soft Distortion. The original unit only had Distortion (called Sensitivity) and Volume controls. This project adds two switches: a clipping switch, allowing you to use a second switchable combination of diodes, and an EQ switch that affects the gain structure and bass corner frequency.

The Maxon OD-880 Overdrive / Soft Distortion was originally released in 1976. This pedal was huge in Japan, being the favored overdrive pedal of Char, one of the country’s most popular guitarists, who—like the pedal—never really got noticed out of Japan. It was reissued a few times, notably in the mid-90’s as well as in the past couple of years.

It’s an interesting circuit from a historical perspective, being sort of a “transitional species” between the Distortion+ and the Boss OD-1 OverDrive: it added the input & output buffers and changed the Drive potentiometer to a flat op-amp boost instead of a gain modifier that also affected the bass tone, like in the Dist+. The Boss OD-1 is essentially an OD-880 with feedback clipping diodes instead of diode-to-ground clipping, though this diode arrangement turned out to be a very significant innovation and made way for the Tube Screamer a couple of years later.

Compared to the classic Distortion+ / 250 circuit, it adds an input buffer (unity gain) and a gain recovery stage after the diode clipping (fixed 20dB gain). It also tweaks how the op amp’s gain is increased: instead of changing the resistor to ground coming off the inverting input, which also changes the tone as the gain changes, it uses a method that would later become the standard: a pot in place of the feedback resistor.

As mentioned earlier, the only major topographical change between this circuit and the Boss OD-1 (which came out the following year, in 1977) was that the OD-1 used feedback clipping diodes instead of diode-to-ground hard clipping, and added an output buffer after the volume control. The values are different, and this PCB uses three single op-amps instead of the quad found in the OD-1, but the circuits are very closely related.

The OD-880 is highly spoken of, but it has one main flaw—it cuts too much bass. It has the same corner frequency as the Tube Screamer (720 Hz) but something about the rest of the circuit makes it thin. The EQ switch lets you fix this: you can use a second resistor and capacitor coming off the inverting op amp to change the gain structure and bass content. Try 3k3 for RX1 and 330n for CX1. Just keep in mind you have to use a standard 2-position SPDT for this—you can’t use a center-off SPDT switch because the “off” position will pretty much kill the gain of the op amp.

The clipping switch lets you include a second set of diodes. Hard clipping setups will change drastically if you increase the clipping threshold, so you might try two diodes in series in each direction for the second option. Note that this will increase the available output volume by a fair amount—this is not as critical in the OD-880 since it has a gain recovery stage, unlike other pedals such as the SD-9 Sonic Distortion. 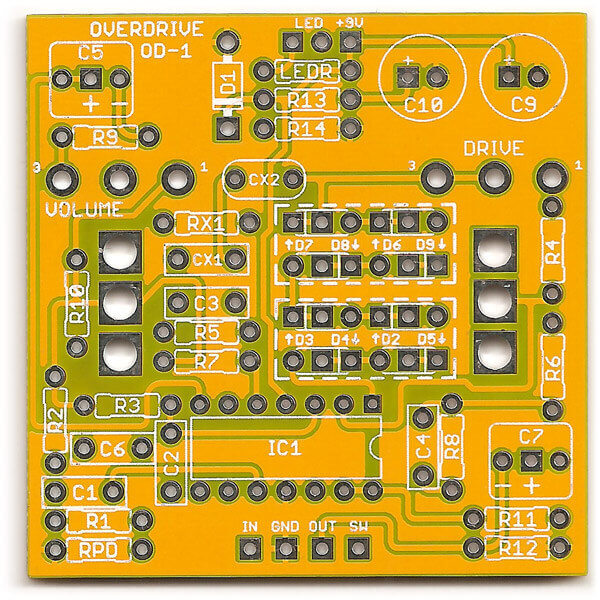 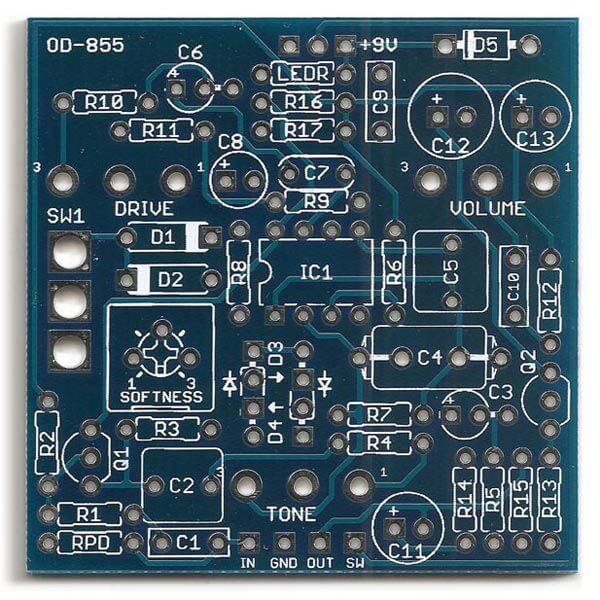