Based On
Colorsound® Overdriver
Effect Type
Boost / Drive
Build Difficulty
Easy
Project Summary
A reproduction of a boost pedal from the early 1970s that featured a two-band tone stack. 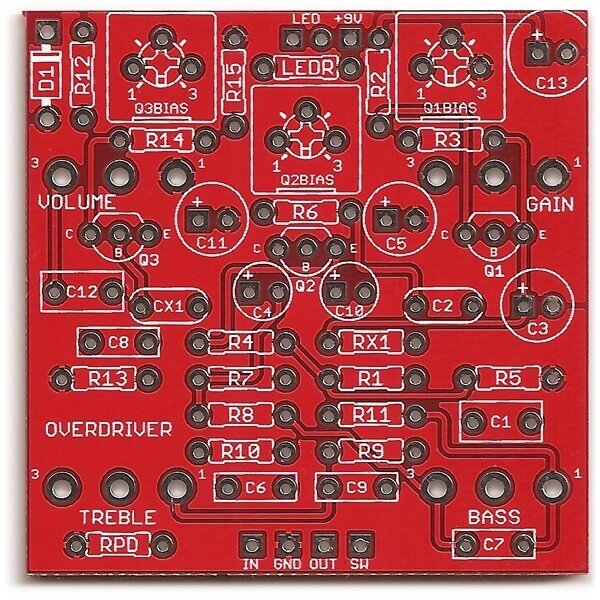 The Plasma is a clone PCB for the Colorsound Overdriver and Power Boost, two nearly-identical circuits that serve different functions. The Power Boost came first, powered by two 9-volt batteries for 18v operation. It had a transistor-based Baxandall tonestack along with a gain control. While it would distort at incredibly high volumes, its primary purpose was to overdrive the amp. The Overdriver came later, having a couple of minor tweaks along with dropping the voltage down to 9 volts. The end result was that the Overdriver had less headroom and distorted at lower volumes.

The Plasma project allows you to build either an Overdriver or a Power Boost, with the incredibly useful mod of adding an output volume control. This way you can set the gain according to the tone you want without being tied to the volume that is produced along with it. It also has trimmers for each of the three transistors so that you can dial in the optimal bias.

The gain of the Overdriver can be “splatty” at medium gain levels as the notes decay. It works best at low gain as a clean boost with tone-shaping capabilities, or at high gain where it’s not unlike a Big Muff. If you experience this splattiness, know that it’s a byproduct of transistor-based distortion and you didn’t do anything wrong!