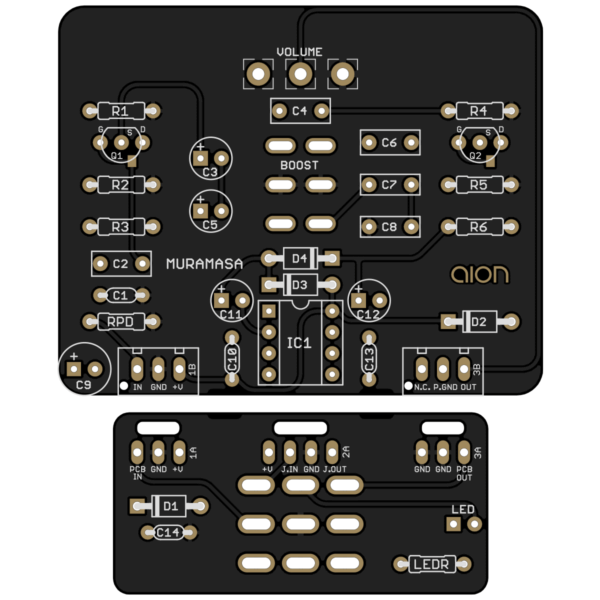 Not yet available.
Kits are developed based on interest, so if you’d like to see one for this project, let us know.
Request Kit
101 people are interested.

The Muramasa JFET Boost is an adaptation of the Keeley Katana, a two-stage JFET boost that was originally released in 2005, the second commercial product from Keeley Electronics after the Keeley Compressor. However, the circuit itself dates a little earlier to 2000, when Robert Keeley collaborated with Legendary Tones to create a pedal called the Time Machine Boost. The “modern” side of the TMB is nearly identical to the Katana, but without the Boost switch.

The pedal itself is fairly simple, using two cascaded JFETs powered by an 18V charge pump. The first JFET is capable of pushing the second into clipping, particularly when Boost mode is engaged.

There have been two major versions of the Katana. Version 1 used the 2N5484 or 2N5458 JFETs, while version 2 uses J201s. While the basic schematic is the same, nearly all of the component values are different in V2. The provided parts list shows the values for V1, while the V2 values are shown in the “Notes” column where applicable.

The JFETs used in the original Katana Boost are not currently manufactured in through-hole format. Extra pads have been provided if you want to use surface-mount JFETs (part number MMBFJ201 or MMBF5484 are still in production; the 2N5458 has no current SMD substitute). Aion FX also offers pre-soldered MMBFJ201s on adapter boards if you find surface-mount parts intimidating. See build documentation for more details.

The Muramasa allows the boost switch to be configured to boost either stage (but not both at once). Otherwise, it’s identical to the stock Katana Boost.